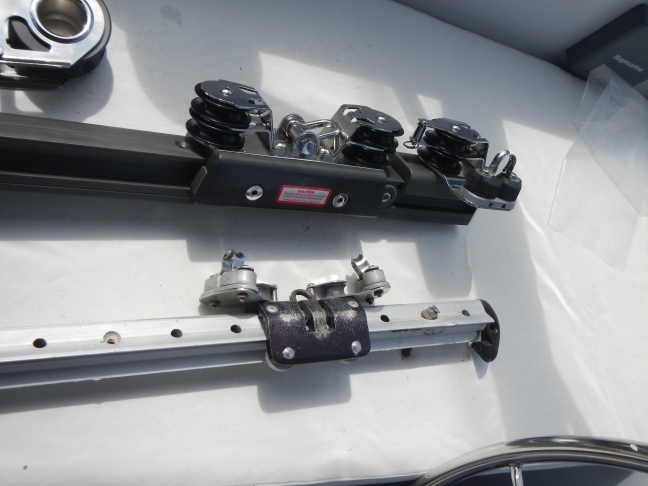 “If it’s not broke, don’t fix it”. Keith, being that his background is an airplane mechanic, doesn’t really follow this rule very well.  In his world if it breaks the plane falls out of the sky, therefore you fix it BEFORE it breaks.

This logic was applied after taking a look at our main traveler.  It definitely wasn’t up to making the long haul with us. So, in our continued effort to make the mainsail more manageable we decided to upgrade the traveler and main sheet. We replaced the old and very stiff traveler that was running on warped brittle delron wheels and only had a 1:1 purchase with a new traveler from Garhauer.  (They even match drilled the new one to the existing holes so it was super simple to install) The new one has ball bearings and a 4:1 purchase.  On top of that we switched out the very aged and also brittle 3:1 mainsheet to a new 4:1 mainsheet, again now with ball bearings.

We also switched out the jib sheet cars as they looked like they might be one robust gust away from shattering. That, and they were also horrid little feet eaters-there has been many bloody footprints to vouch for that. 😦

I think with these simple upgrades we just cut our sailing work in half and maybe prevented a few loud and scary failures as well. (Hopefully there will be less bloody footprints on the deck, too)