To follow up on my freeze dried food experiment, I thought I’d list my favorites so far. I haven’t been quite as methodical in my testing as I had planned, but still have a pretty good idea of the results. First, it was an overall success and we will be including freeze dried vegetables in our provisions as a supplemental ingredient. Second, I think we will enjoy them!

So far the winners are mushrooms, peppers, spinach, and blueberries.

Mushrooms- well these have to be the #1 because we ate them all and wish we had more. They were easy to hydrate and tasted better than canned. We added them to omelettes, pizzas, sauces, stuffings. We will be taking a lot of these!

Spinach-this is a winner, too, especially in an omelette. It was also easy to add to pastas. Tastes like fresh wilted spinach.

Peppers- these were good enough to make fajitas with. I will also use them for fritter recipes, pizzas, and sauces. It seems every recipe starts with “one onion and one pepper”. I am going to get both red and green peppers. (The red peppers in the photos are fresh) 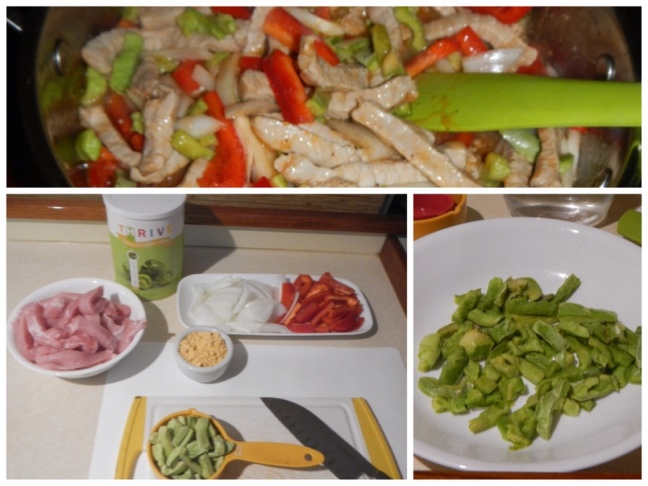 Blueberries- were awesome! Muffins, pancakes, oatmeal, pastries…. I can go on and on. What is even better, now I don’t have to pack premade, processed blueberry muffin mixes or oatmeal packets. I already have the ingredients for these items from scratch- now I just add the blueberries (or strawberries, or peaches, or raspberries). Yum!

Also winners, were the zuchini, corn, mixed veggies, and edemame.

Zuchini-I added to a veggie pizza, a casserole, and a pasta dish.

Corn-better than canned, I made a corn and black bean salsa with lime dressing.

Mixed veggies-(from Target) made my chicken pot pie recipe with these and ate it all up before I could snap a picture. We couldn’t tell the difference from the frozen veggies I usually use but don’t have the freezer space for now. Green peas will definitely make my next order.

Edemame- (also from Target) was great to add to salads.

The misses were tomatoes, celery, cauliflower, and the walmart brand fruits.

Tomatoes-I only have these because they came as part of a combo deal. They weren’t terrible, I just can’t see where they were an improvement over the easily accessible fresh or canned option. Same with the potatoes that came in the combo-unnecessary.

Celery- I wanted so badly for this to be a winner. I like celery in my tuna or chicken salad but the pieces were so tiny (smaller than a corn kernel) that they just didn’t crunch. The flavor was good in some stuffing but unless I find a brand with larger cuts, this sadly won’t make the cut. Fresh celery in tinfoil it will be for me.

Cauliflower-was actually amazingly good rehydrated, I just can’t think of when I would be needing it for any recipe. I’ll pass on this one. (In the photo I cooked fresh and the freeze dried cauliflower together to compare, the FD is in the upper left side of the pan)

Walmart brand- this was the only place I can say there seemed to be a notable quality difference. The product was dusty/crumbly and the fruit tasted unripe. Still, I made a decent baked oatmeal with the fruit medley mix.

Two additional factors that I think will make these freeze dried veggies a success for us is:

One, the cooking times seemed to be the same as fresh, which is good because in almost all instances they are just one ingredient in an otherwise traditional recipe. Just trying to supplement the fresh veggies.

And two, I LOVE the fact that the portion sizes are whatever you need. Want eight mushroom slices for your omelet? Fine. Only want a 1/4 cup of edemame for your salad? No problem. It doesn’t work that way with canned, or fresh even. Oh, and I also like that the chopping is already done for you 🙂

My next experiment will be growing an herb planter. So far I only have basil, but it’s a start.

I like to cook and when we have been cruising previously a good part of the day-every day- is centered around meals. I love to fix a big omelette loaded with veggies or French toast for breakfast. Lunches are pretty light and fast but for dinners I go all out again. Fresh caught fish (hopefully), some sort of salad, veggie sides, fresh bread of some sort, and homemade sauces. We really don’t subscribe to the “camping” style of eating while sailing. So it may seem surprising that I just received a large delivery of freeze dried food stores delivered in the mail this weekend.

First. Yes, I know there is food everywhere. Yes, I know it helps to stimulate the local economy to shop local. And, yes, I know most vegetables/fruits can be stored for quite a while when stowed properly. I plan on doing all of the above, but I was still looking to find ways to limit the amount of processed and pre made meals. Basically, I want to have the ingredients to make my own soup instead of pouring soup out of a can.

I started getting curious about the freeze dried foods. Apparently they retain about 90% of their nutrients, have no preservatives or salt, and have a 10-25 year shelf life (unopened). Their texture and taste is supposed to be similar to fresh or frozen. Sounds great-load me up!

Still, being a bit skeptical, I thought I would like to try out a variety of the options available before I loaded up the bilges. Last week I ordered a selection of fruits and vegetables from two different companies to see just how much like their fresh counterparts they really are. Also to see if there was a difference in quality between companies. I plan on trying out each ingredient several different ways:
1) In a recipe I already use frequently. (I think this will give me the best test as to how the freeze dried compare)
2) In a recipe that I think will be best suited for the freeze dried.
3) In a new-to-me recipe that looks like it would be good to add to our cruising menu.
I plan on using a mix of fresh, canned, and freeze dried foods-just like I plan on doing in the islands. I’m not trying to make my own MRE meals here.

So, I guess the test galley is open!

Here is a list of my trial ingredients I have to work with.

I also picked up chives, cilantro, garlic, and basil freeze dried herbs to play with. I left the meats, dairy, and grains alone for now.

Where were we:
ONE year ago: Going Backwads