This is a first, though…

We have an entire chain of islands to ourselves!

It is the beginning of off season, and, yes, the Jumentos are lightly traveled, but we didn’t expect to not see a single other cruising boat our entire time here!  We’ve sailed from one end to the other and back and confirmed we are the only cruising boat here.

It is the perfect time weather-wise to be enjoying this area so we are surprised.  A few times we even remarked that it felt a little weird.  Most of the time we simply soaked up  the solitude.  With no cell service our only communication has been SSB radio and even that we haven’t used much beyond getting weather.

Now, we weren’t the only humans about— just the only cruisers. Out of a chain of about 26 islands two of them are inhabited.

Buenavista Cay has a population of one.  His name is Edward.  He is building a new home next to the one that his father lived in and before that his grandfather.  Edward hopes his son and grandson will join him on the island soon. He shares his island with lots of goats, sheep, chickens, and even peacocks.  He was a delight to meet.

At the southern most tip of the chain is Ragged Island; it has a small settlement, Duncan Town.  I read the population is about 100.  I’d be very surprised if it was that many.  It’s a sweet, sleepy town.  It was once much bigger, when it was a player in the salt industry.  Now more houses than not are unoccupied, but the island is still warmly welcoming.

Things just run at a different pace here. If you would like to eat out you make arrangements a day ahead for the restaurant (singular) to open for you.  The grocery store—also open only upon request—at least this time of year—had a few staple items. But basically you place an order and your groceries will come in on the next mailboat. The mailboat comes 3-4 times a month dependent on weather and barring mechanical problems.  There is no place to buy fuel or water. 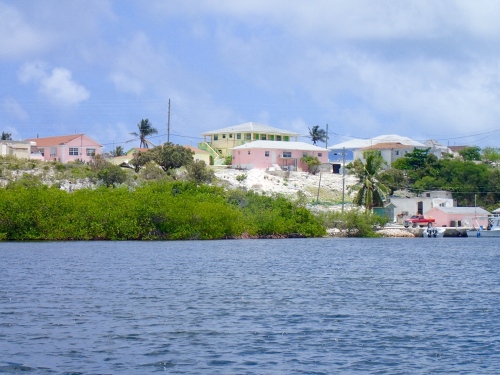 ^^ The settlement looked surprisingly big, but most building as are empty. 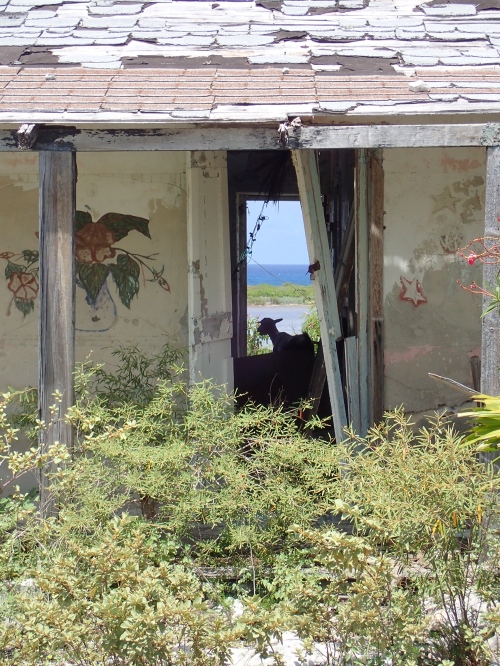 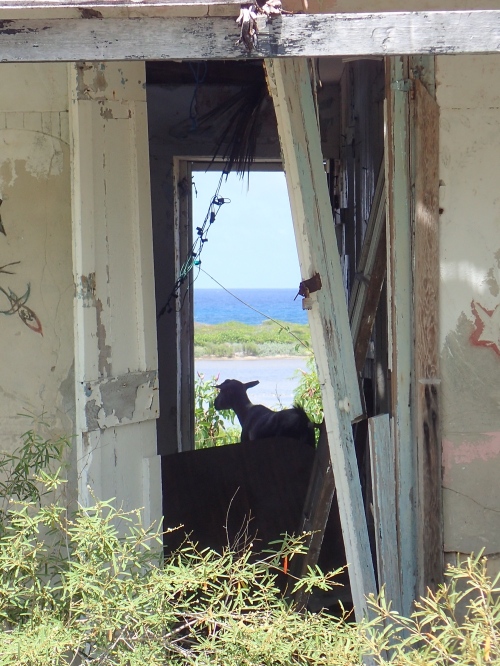 ^^ goats were everywhere!  This one found shade in one of the many unoccupied houses.

The shark population continued to demonstrate its healthy numbers to us though. Jeez!

One one of our first dives down here Keith got a grouper; it holed itself up in some coral with the spear.  Just at this time I saw a nice hogfish close by and was thinking about going after it until Keith pointed out a reef shark coming up over the edge of the coral towards us—not what you want to see with a bleeding, flopping fish below you.

Keith swam down for the grouper and figured he’d give one good pull if he got the fish—yay.  If not, we would surrender it.  He got the fish and by the time we got to the dinghy the shark was circling where the fish had just been holed up.  But the shark didn’t bother with us.

Just as it started to swim off that same hogfish swam right under the dinghy.  Keith couldn’t resist and dove down and I kept an eye on the shark (that was swimming away).  As soon as it heard the “chink” of the spear it whipped around.  Wow—they know that sound!

That particular shark wasn’t aggressive towards us, but we called it done after that.  It was pretty much that way for all of our dives here.  Keith surrendered one fish a couple days later—no reason to take the risk.

On one dive we were swimming up against the rock ledge of the island, I was maybe 20 feet away from the rock wall and was thinking that I kind of liked this-I only had to keep a look out on one side of me. Maybe three minutes later a large reef shark swam between me and the wall!  Because I wasn’t looking at the surface or to that side I didn’t even see him until he was less than 15 feet away and coming towards me. Then it just slid right down next to me.  I pulled my hands in to keep from bumping it.  Startled the bejeezus out of me!  A shark at the surface gives me the creepies much more than the ones swimming below me, I don’t like being eye level.

I called it a day when I had one go down the other side a few minutes after that.  Despite having company in the water, it felt awesome to have fresh fish for dinner every night again.

The water and amount of life was everything we had been dreaming of it to be. 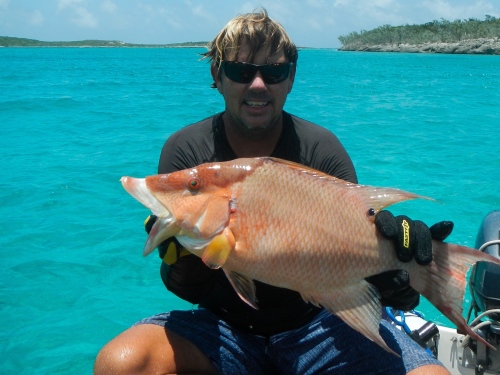 Our last few days we finally had someone share the anchorage with us—a few of the commercial fishing boats.  One of them was on their day off.  It was funny to see that the fishermen spent their free time going fishing.

Keith was filleting our fish on the beach. He likes to take the cutting board over to the shallow water and put it on the rocks and just enjoy a beer and the beach while he cleans the fish.  One of the fishermen came over and offered him use of the work tables on the fishing boat, a generous offer for our two fish.  Keith showed him he had a little set up already in place and they enjoyed a few beers and the afternoon together, each getting a chance to talk to someone new.  Keith was happy that the fisherman thought he did a good job on the fillets. 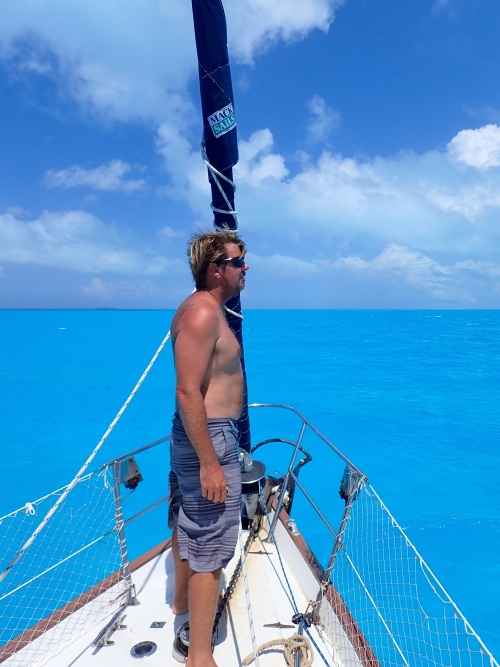 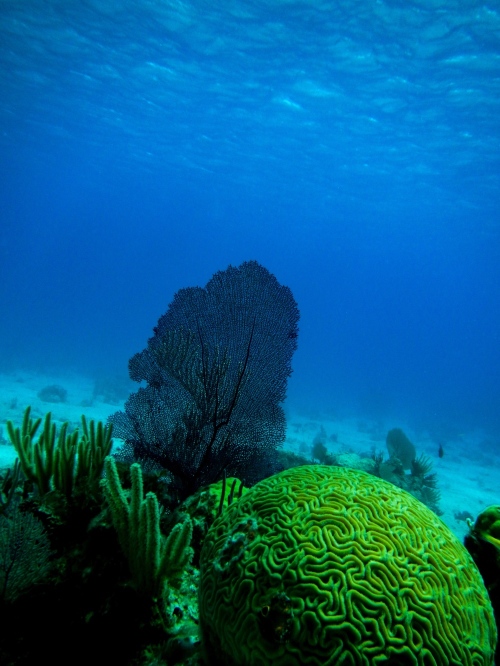 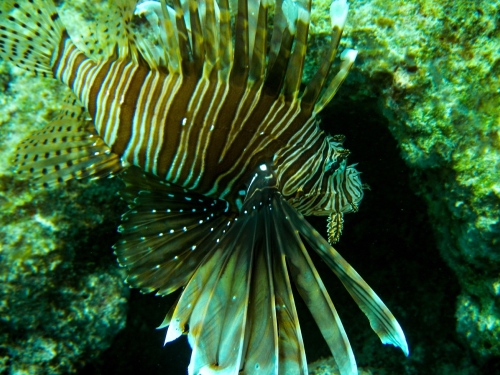 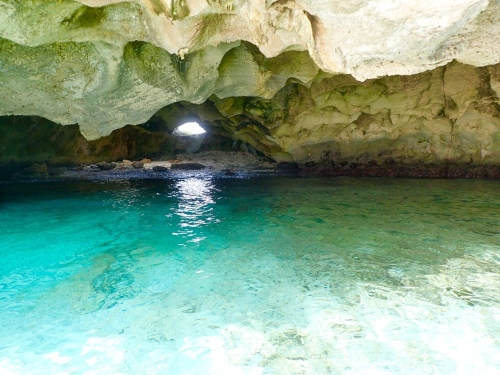 I think these islands’ allure is equal parts of what they have as much as what they don’t have.  While, perhaps not dramatic, the water, fishing, snorkeling, and wildlife are stunning.  However, what they don’t have may be their biggest treasure. No crowds, no connections, no distractions.

Our weeks have been simple and calm here.  (Obviously, we’ve  found less rolly anchorages.)  Our days are based on tides and winds.  Most of the day is consumed with meals— either catching, cleaning, cooking, eating.  And our entertainment has been fish and birds and goats and sunsets and stars.  Walks and snorkels have provided us with more entertainment.

Basically, we’ve been enjoying ourselves. A lot.

Jumentos, I believe we are in love with you. 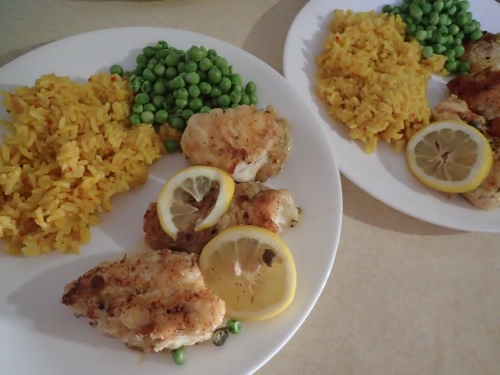 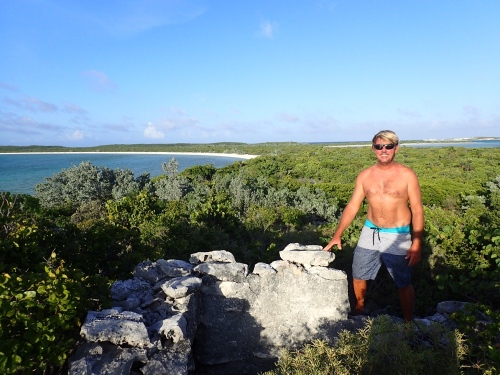 ^^ Many of the islands were once settled by Loyalist and the ruins and rock walls are still around and made fun exploring. 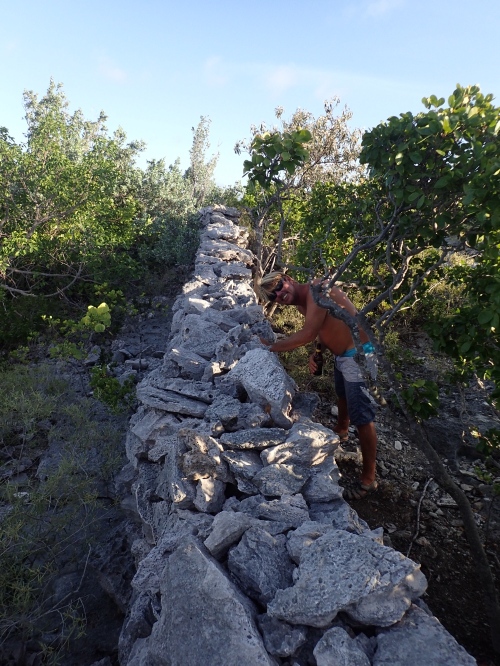 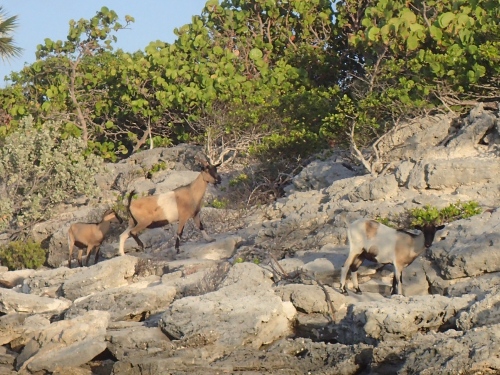 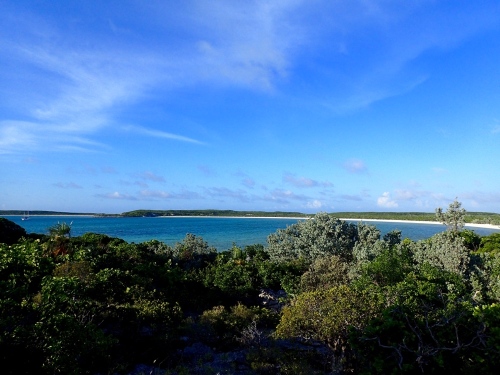