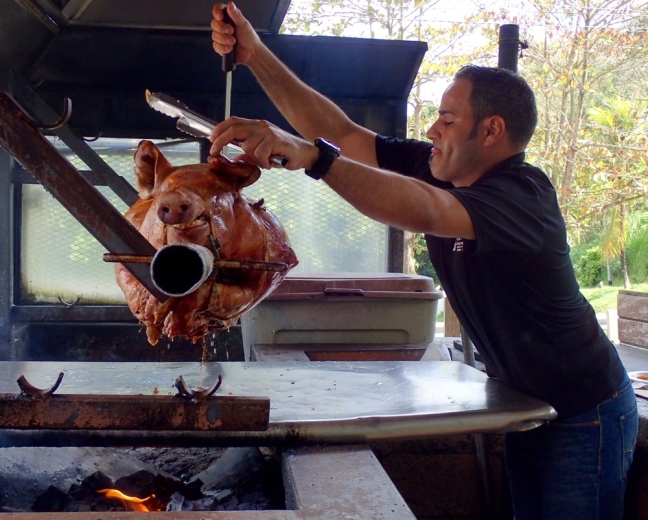 Puerto Rico! Finally breaking away from the congestion of St. Thomas, we retreated to Culebra and her little sister Culebrita for a little quiet time.  We stayed two nights in a flat calm anchorage looking straight out over the Caribbean Sea but protected from the swell by a shallow reef.  It felt glorious to stop rolling after so long in St. Thomas!  During the day we left our peaceful anchorages and ventured over to the rolly anchorages by Culibrita to go exploring. It was squally and since we were on a mooring that we didn’t fully trust we stayed very close to the boat but did take a walk up to the crumbling lighthouse, saying hello to lots of wild goats along the way.  We snorkeled the reef right under our boat to cool off (We did no spear fishing here-the ciguatera risk is too high for our comfort), but we passed on the bubbling pools when we saw a couple boat loads of tourist disembarking and heading that way. 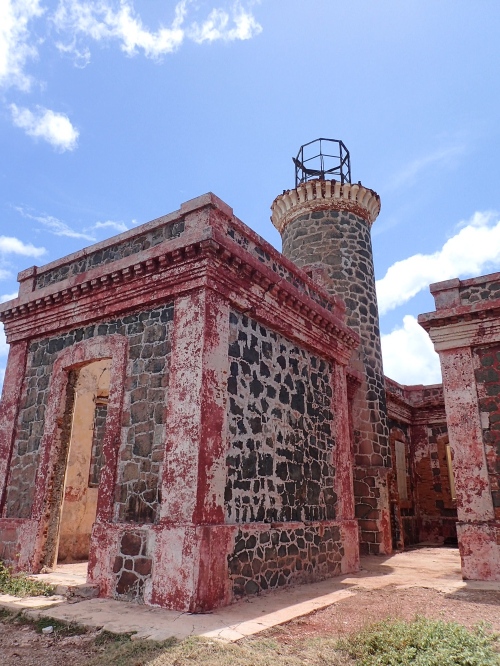 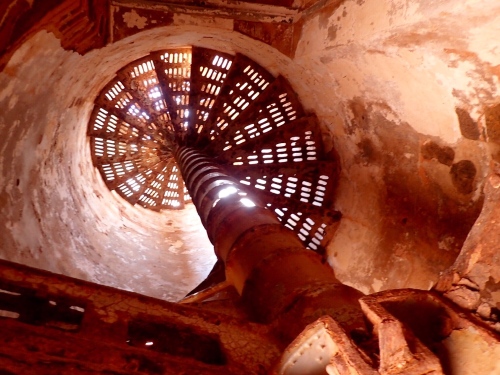 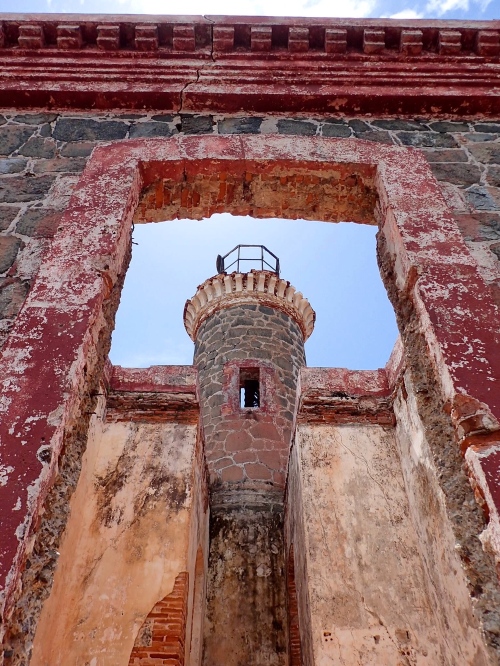 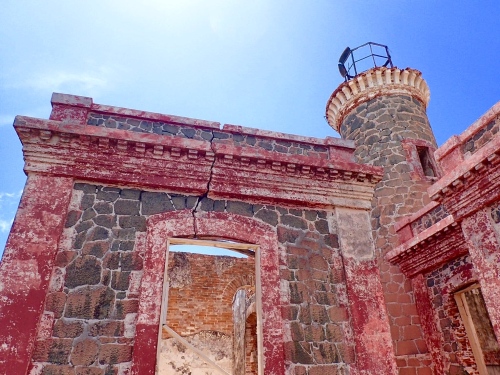 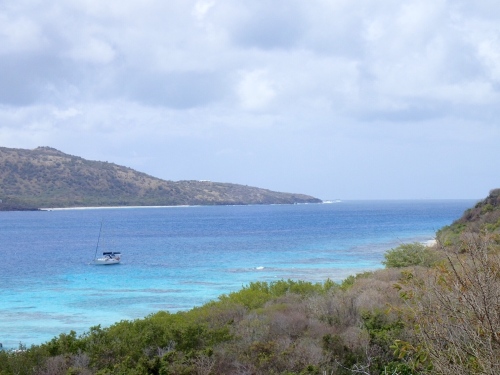 The sail from Culebra to Salinas, Puerto Rico was a long, but very productive one. Keith set the poles as soon as we came up to the drop off and almost immediately we spotted a boil that we altered course for. TUNA!!! And we got one! As Keith was bleeding it we got another hit, at first we thought a shark because of the blood but it was just a pesky barracuda.  Boo. Before we could get it all the way in to release it the other line went zzzzziinngggggg! Now we have one slippery, bloody tuna, a fillet knife, and a half reeled in pest all going on on the aft deck at the same time all while lumping around in the waves. I keep saying I should mount the GOPRo to capture the chaos as we try to fish (but if I did that we, of course, would not catch anything).  We thought the next fish was another bigger barracuda…until we saw the stripes.  Our first Wahoo!!! Fish tacos for dinner-yum! It feels SO good to have fresh fish on our boat again.

With more than enough fillets onboard we pulled in the lines and the rest of the sail we spent trying to figure out just what we wanted to do with our lives, where we wanted to go, live, work, all that stuff……the outcome of that looooonng daylong discussion will have to be another post. (Spoiler: we’ve got a plan!)

Salinas reminds us of Florida with its mangroves, river-ish water, and even manatees.  Except they are very friendly towards cruisers and have mountains in the background so we settled in for a couple days.  Unfortunately the water had a distinct port-a-potty smell and we were happy to escape it by renting a car for two days and checking out the rest of the island. 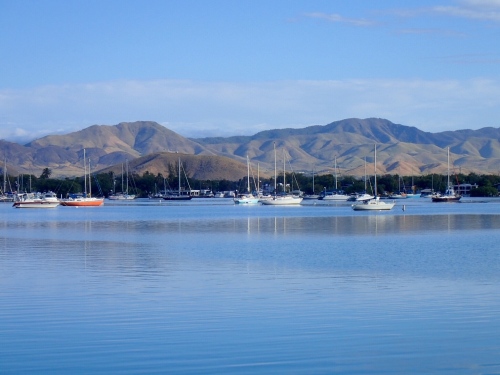 Puerto Rico cannot be seen in two days.  Add in the fact that we also needed to do all of our provisioning for the summer in the Bahamas plus hit up a list of stores like Wal-Mart, West Marine and Home Depot we had to do some major prioritizing!  The rental car  situation was a weird mess.  The marina by the harbor can arrange a car but we learned it was just a private guy with his personal car so we passed and arranged with a major provider.  They couldn’t pick us up (after saying they could) and we couldn’t find anyone who would so we were delayed a day. In the end we wound up using the marina’s guy.  He said he would bring all the paperwork and it was fully insured blah, blah, blah….  The morning of he handed us a brand-new car-only 121 miles on it- and we handed him $120.00 cash.  No paperwork.  I don’t even think he knew our names.  But, he promised over and over full coverage. No worries!  It’s not like they drive insane here or anything. Yikes. Hope so.

First priority and first stop was a small winding road in the town of Guavate. It is known for the Lechonerias that line the road all selling spit-roasted pigs.  Both Anthony Bourdain and Andrew Zimmerman have featured this drive on their shows so I was worried it might have turned touristy, while there are several food trucks and souvineer vendors when you first turn onto the road they quickly disappear after the first few yards.  It is advised to go on a weekend at lunchtime when it is lined up and traffic slowed to a crawl with locals.  We had the car on a Wednesday and it was closer to breakfast time than lunch but it would just have to do.  No traffic jams and a few of the places were not open, but we had no problems finding a juicy pig!  Best. Lunch. Ever.  Including that crispy slice of skin.  Oh boy, so good.  In fact, we re-arranged our schedule just to eat here both days. Plus we had enough leftovers for a dinner too on the second day. 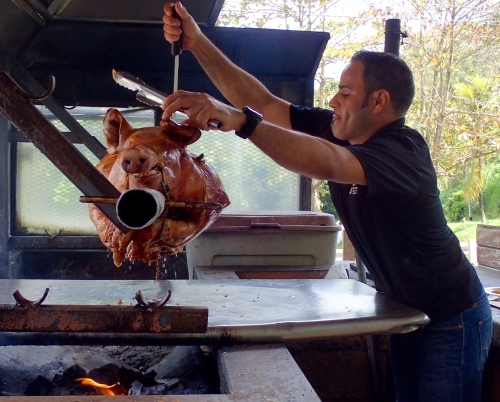 Next touristy stop was Old San Juan.  We wandered through the colorful streets and down the brick roads but didn’t need lunch and it wasn’t the kind of shopping we needed to get done that day so we spent most of the time checking out the fort.  It’s a pretty impressive fort. We hit Walmart and the other stores on the drive home.  I was way too tired to pull off a major provisioning run properly so meals might get interesting in a few weeks. Our last stop of the night was Keith’s choice.  We didn’t want to eat out because we wanted to get back to Kai, but having only eaten our very early pork lunch we were starved.  He pulled into a boat storage yard by the harbor.  I had no idea why.  In the back there was a bar with blinking disco lights, loud music and some guys playing pool under a canopy. We got ice-cold drinks and he ordered some chicken empanadillas to tide us over till we cooked dinner. They were pretty damn delishious!  Just as I was wondering why one of the tough-looking guys kept looking over at us he approached and introduced himself.  He asked where we were from and and welcomed us to the neighborhood-let him know if there was anything we needed while we were in the area and we talked with him for a while. It was a perfect ending to our long day! So how did Keith know about this place?  He found it walking to the grocery store earlier in the week.  (No wonder he didn’t mind going to the store each day even though it was a couple miles walk)  He hadn’t told me about it because even though he had bought an empanadilla to bring home for me, each time he had eaten them himself before he arrived!  After having one-I can’t even blame him. 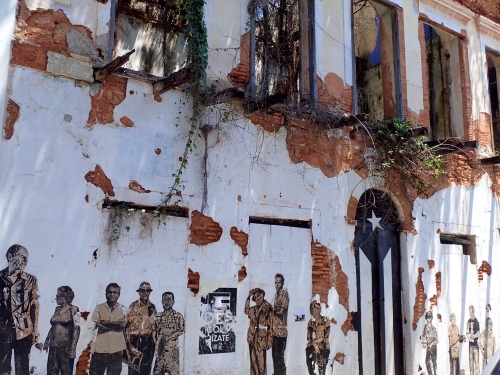 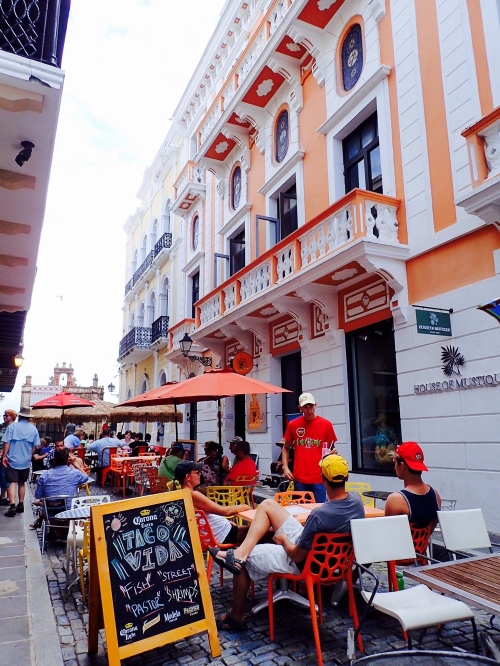 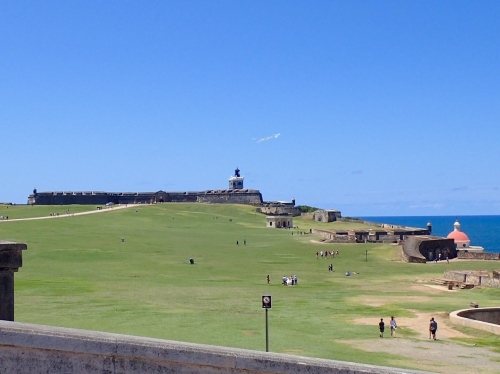 Day two of touristy things was all about the rainforest (and more chores).  The El Yunque park is a legit rainforest and since going to a rainforest is on my bucket list it was non-negotiable.  I absolutely loved it.  Since we did the full-immersion waterfall experience in DomRep we stuck to the just looking experience.  Because of time restraints we didn’t take any of the long hikes or even see the big, big waterfalls but completely enjoyed the experience we did have. I loved the huge, lush, dripping-wet leaves everywhere.  I’d go back in a heartbeat! By far, this was my favorite part of Puerto Rico. 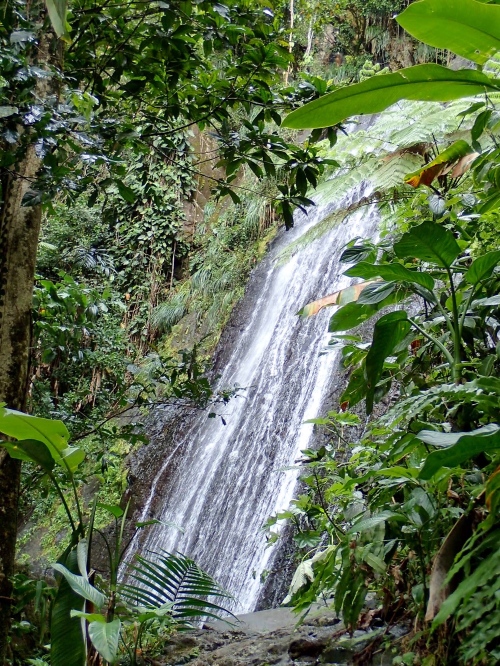 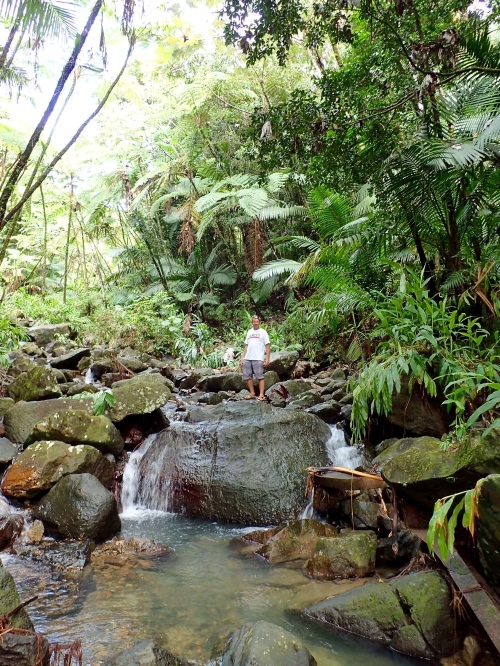 Goodbye Puerto Rico.  You were tasty and gorgeous!