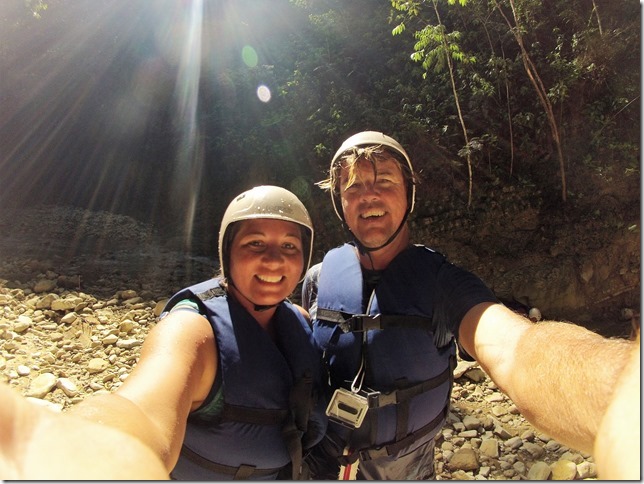 Today was the most fun I can remember having-maybe ever!!!

We wanted waterfalls. We got waterfalls-twenty seven of them! And we didn’t just get to stare at them or sit under them. No, we got to climb, jump, ride, slide, and float down and over and under them. What an amazing day.

The Rio Damajagua waterfalls were a must-do experience for the crews of Antares and Blabber as well so off we all went together.  They are such a fun crew.  The plan had been to add a little local flair to the day by taking the public transportation bus to the town of Ibert and then a motoconcho from there to the waterfalls.  But we had such a great time yesterday on the motorcycles we decided to rent them again and skip the bus ride. Vroom-vroom.

The waterfalls have in recent years started requiring a guide and that you wear a helmet and lifejacket. You get a guide for your group-whatever size that is so you do not have to get lumped into another group.  That was nice and because we chose to do all 27, not just 12, and we had the experience almost all to ourselves. I was worried that it would be a “Disney Land” kind of experience.  Happily, I was  very wrong.  I was also quickly grateful to be wearing the dorky looking  lifejacket and helmet!

Ok, so you start off at the bottom of the waterfalls and there is no tram or cable car that takes you to the top.  It is a whole lot of hiking and climbing “up”. Twenty seven waterfalls worth of UP. But first you cross the river, there used to be a suspension bridge but it got swept away in the floods.  This means you now have wet shoes and clothes on from the very start.  Hello chafe! I should not have worn swim shorts. I don’t know how far or how long we hiked up but I was really ready to start heading down by the time we got to the top.

The down part was so much fun and a total mix of experiences from relaxing to challenging.  The very first waterfall was a jump one, it wasn’t too high and the cool water felt great!  It was the first chance we got to really enjoy the scenery too. The next one was a sit down and slide one (like our butts had not been tortured enough on the motorcycle the past two days).  After going over the first few we kept wanting to do them again not really taking in that there were still two dozen more waterfalls waiting for us. Some of the jump ones were a little intimidating for me.  You had to make sure you jumped out far enough to clear the rocks, but they were also narrow sometimes and if you jumped too far you might hit the other side.  You also wanted to land in the deep section of the pool. We very gently kissed the bottom a few times. The sliding ones were where I appreciated the lifejacket just for the little extra padding on the way down.  You really zipped down some of those!  I must not have been very graceful because a few times the guide very quietly asked if I was OK afterward.  I didn’t see him asking anyone else.  I am currently sporting bruises on both elbows, my chest, and an ankle.  Oh, and also a purpling, puffy eye- but that was from a 4 foot tree limb falling from the sky and not a waterfall. Despite these, I would do it again in a heartbeat! It was still the best day ever. Keith and everyone else came out completely unscathed.  Between the waterfalls we either floated- lazy river style, or, in a few shallow sections, walked through the river. In one section the boys swung from long vines. Our guide completely gave up trying to usher us down quickly.  In fact most of the time we didn’t even see him, he would go around the corner and just wait at the next waterfall.  Sometimes we were deep in narrow canyons and other times a wide flat river bed filled with tumbled rocks.  On top of being non-stop fun, it was also gorgeous.  I took 487 photos between the two GoPro cameras and I would love to share how gorgeous it was here but, unfortunately, I have about 477 blurry, out of focus, water-spotted photos. Sorry. If you want to see real photos of the waterfalls just Google image search “27 waterfalls Dominican Republic”. They are much better than the ones I took.

^^Yep, a sampling of my 487 blurry photos to help me remember this day!! 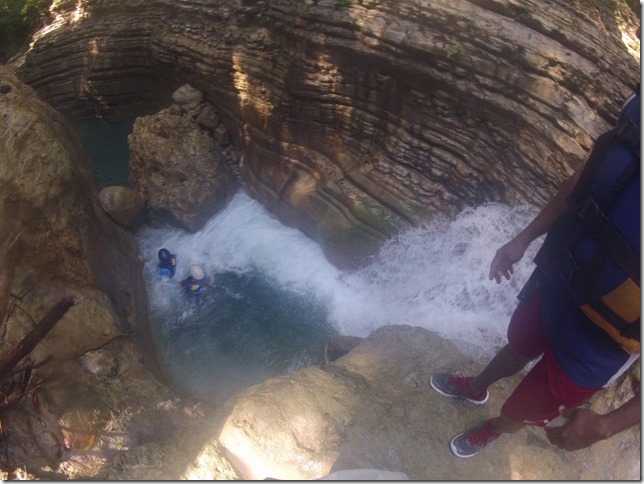 ^^You just jump down there, don’t hit any rocks on the way down then climb over those two boulders and jump into the pool below them.  No sweat.  It took me past the count of three to make this leap! 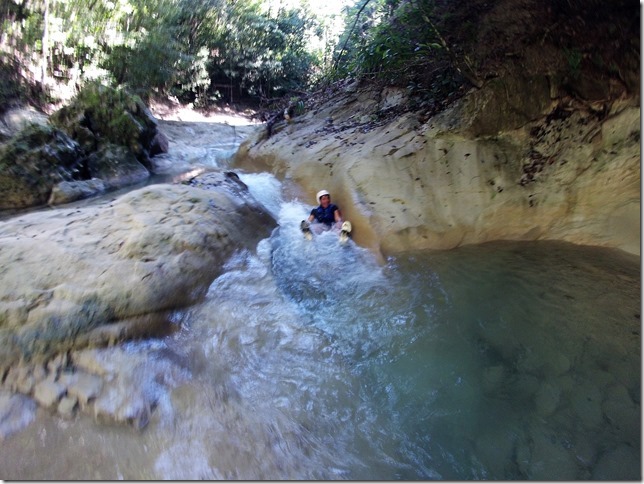 ^^On this one the guide hangs on to you while you get your feet and arms all tucked in, then he lets go.  All the others you do completely on your own he just tells you where to stand and where to aim. 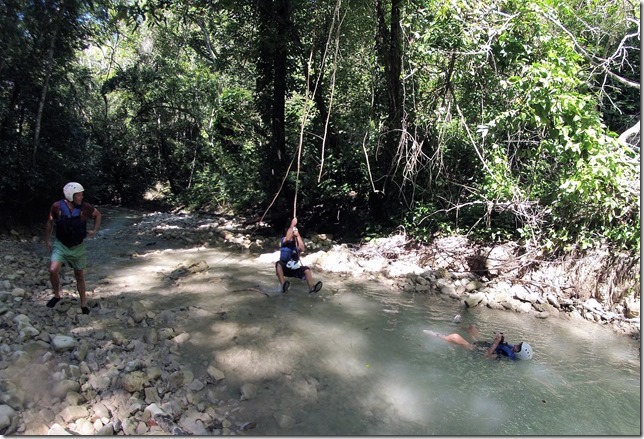 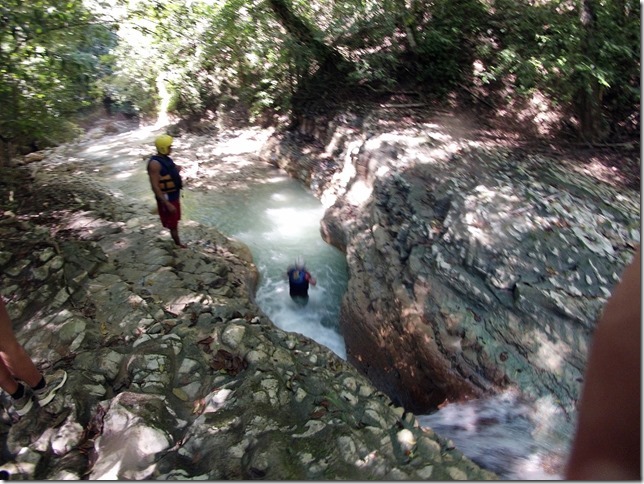 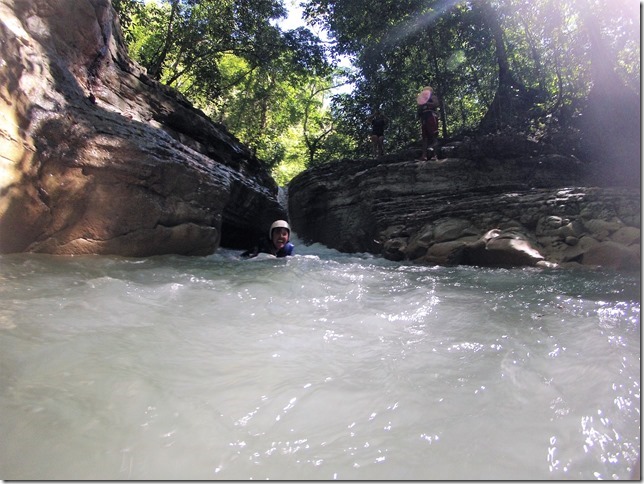 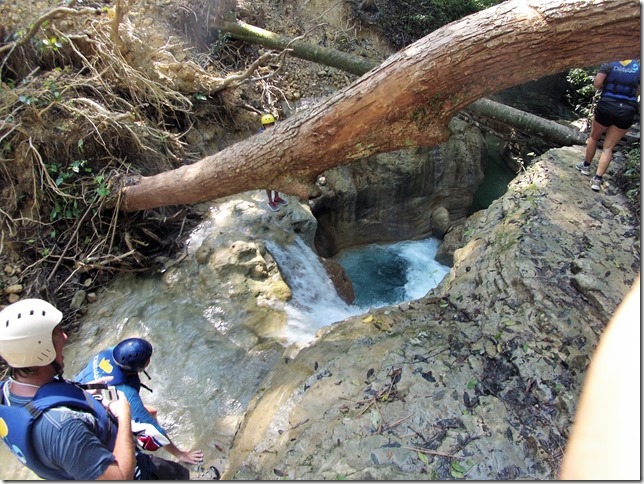 ^^The floods had caused some destruction and erosion but didn’t interfere with any of the actual waterfalls.  The guide said it had been much prettier before the floods.

^^This may have been the scariest of them all- it is too shallow to jump down so you climb down the wobbly sketch-o ladder.

The waterfalls would have been experience enough to complete the day, but we had the motorcycles still and were ready to fill in the rest of the afternoon.  First up was to refuel with a hearty late lunch.  We drove around the city and ended up selecting the first place we had looked at.  The owner was fantastic and so was the food.  We got huge servings- which we inhaled!  Our favorite thing was a sweet banana casserole with meat and cheese.  I know, it sounds very gross.  It was not.  The owner was nice enough to write down the recipe for me too. Lunch for both of us with drinks cost under $8.00. I love being able to afford a meal out! 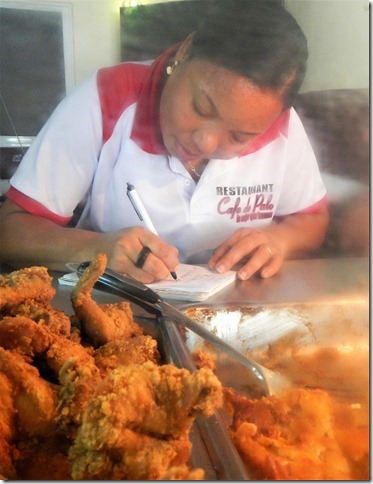 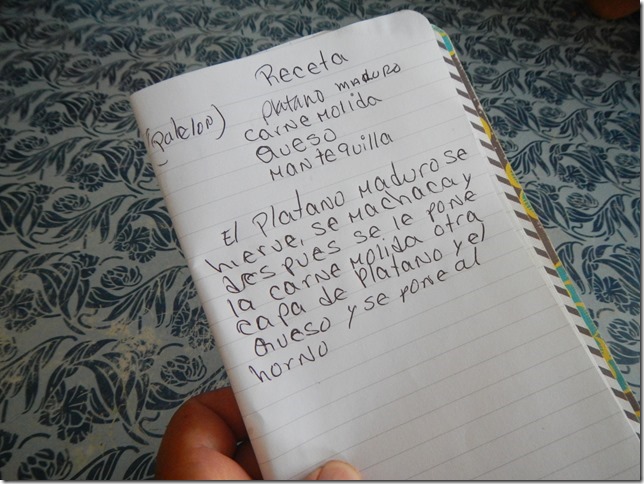 On the ride back to Luperon we passed a building that had a crowd of people and a lot full of motorcycles.  We flipped around and checked it out. It thought it might be a band or dance. It was a cock fight.  Right about the time I figured it out Ingrid and I (and only Ingrid and I) were ushered into the very crowded caged pit.  I have some very strong opinions about cock fighting and animal cruelty.  Having said that, I was now squeezed inside a cage that was filled to the ceiling with very excited men, 2 prized roosters, and a lot of money being waved around that was at stake.  Taking this all in, I thought that maybe I should keep those opinions very much to my self! And I did.  I wanted no part of watching the fight but didn’t want to offend the gentleman who was gracious enough to lead us in without tickets while others, who certainly did want to watch, were still waiting outside.  So Ingrid and I were spectators at a cock fight whether we desired to be or not.  Thankfully once the action started I couldn’t see anything but the rear ends of the men jumping up and down and shouting in front of us.  It was an intense and loud experience. We laughed pretty hard and agreed that maybe it was too local of an experience! It certainly beat out a bus ride! When it was over I was very careful not to look towards the ring, I didn’t want to see the chickens. No one had paid us any mind, and everyone was very respectful while we tried to climb out of the cage before the next fight. What a crazy, over-the-top experience. However, unlike the waterfalls, I am not eager to do that again.  Once was enough.

^^This photo was taken by accident, I was just clutching my camera and got jostled.  It captured the guy leading us in perfectly though!

^^This one I took on purpose, no one was paying us any attention anyway- it was all about the money!

^^Thankfully this was my view once the action started, well once it started they were jumping up and down.

We reunited with the rest of the group, got on the bikes and got back on the road.  Our next two stops were much more tame- ice-cream and then school parade. 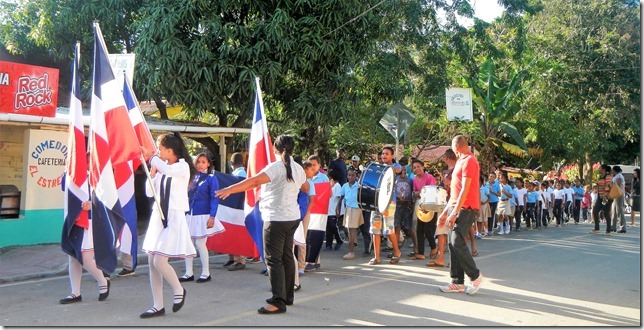 The final stop of the day was the bar that overlooked the harbor.  We had a few drinks while recounting one of the most exceptional days I can recall. I will remember this day for a long time, the pictures that didn’t turn out won’t even be necessary.