The sail from George Town to Luperon, to wrap it up in a nutshell, was absolutely splendid!

The day before we left we finished up our final errands, re-checked the checklist, reviewed the weather and charts, and tried to rest as much as possible.  In the afternoon we went to the beach and had a bonfire and cooked hotdogs with our friend Craig.  We’ve shared more harbors than not with him since we crossed to the Bahamas together.  Besides sharing anchorages, diving, hiking, and exploring the islands together he has made our cruising experience so much richer and we are going to miss him.  We’ve shared more meals together than we could ever count so realizing that this one was the last we would be sharing for at least a little while was hard to say the least.  It seemed unreal that our bows would be pointed in different directions the next day.

The morning of departure we pulled anchor by 7am, the seas were still in the process of coming down from the past two weeks of wind but they were comfortable and mellowed quickly.  We were even able to turn off the motor and just sail for a few hours in the morning. This relieved us some of our fuel consumption concerns.  By mid day we rounded the northern tip of Long Island and sadly waived goodbye to Craig as he headed off to Conception Island.  After rounding the tip, the wind, though very light, had not shifted enough yet to give us a push.  Calculating with our current speed we were not expecting to make it to Luperon until Sunday.

By sun set we were motor sailing again.  There were several boats going the same direction and we wished each other well over the radio. By dark the seas were calm, the wind was just strong enough to keep the sails filled and sometimes even give us a push, the stars were unbelievably bright.  It was a beautiful sail.

In the morning we were still in sight of the two boats Blabber and Antares (the fun Dutch boats we met at the beach Christmas dinner at Staniel).  Another boat, Abaco, (also met them at the same time)was also sailing the same route, but they sailed much faster than us and had passed us in the night.  There were a few other boats too but they were stopping in the Turks and Caicos to wait out the approaching cold front.  We had gotten enough speed with the north wind that we were now calculating that we might be able to get in by Saturday night. 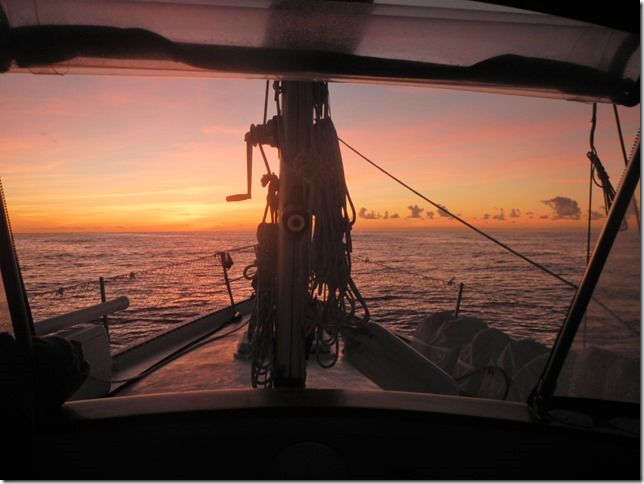 The following day and night were simply delightful. Being out on the water, removed from everything and all distractions, brings a feeling of contentment that I have yet to find another way to achieve. 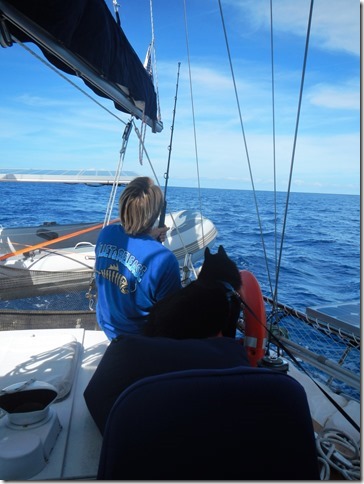 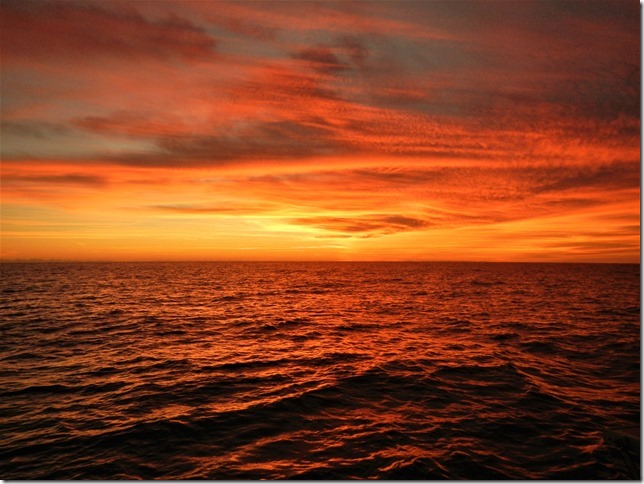 On the third day, when I went down below to sleep and kept hearing a noise-like wind chimes- but under water. I called Keith down, but we couldn’t find the noise.  We thought it might just be some slack in the steering system, but we had never heard the noise before.  I tried to lie down again, but couldn’t put aside the new noise that was coming from seemingly below me.  Keith and I searched again, pulling up the bed and looking in the bilge.  I kept saying it’s like it is something under the boat.  Keith went outside and looked over the stern and immediately solved the mystery.  We were dragging a long line with two Styrofoam buoys-they were causing the “wind chime” sound against the hull.  We immediately cut the engine.  The line thankfully had not gotten wrapped in the prop and we wanted to keep it that way!  We couldn’t free the mess from the boat so we took down the sails and Keith put on his swimsuit.  He was able to easily untangle the lines from the rudder.  He said the water was so much warmer than the Bahamas.  We were back underway within minutes of finding the line and it caused no harm but we didn’t overlook how serious the situation could have been.  That line in the prop could have done serious damage and we were still 95 miles from the coast.  I am really glad we were not trying sail that last bit in the light winds- it might have taken longer than we had before the cold front would have caught up with us. 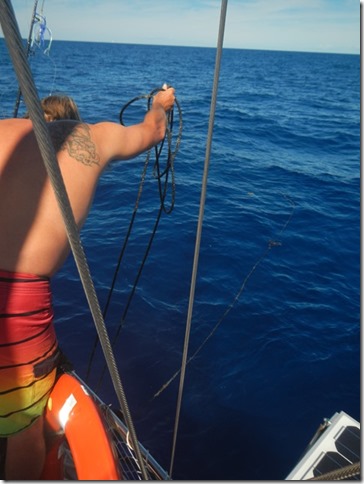 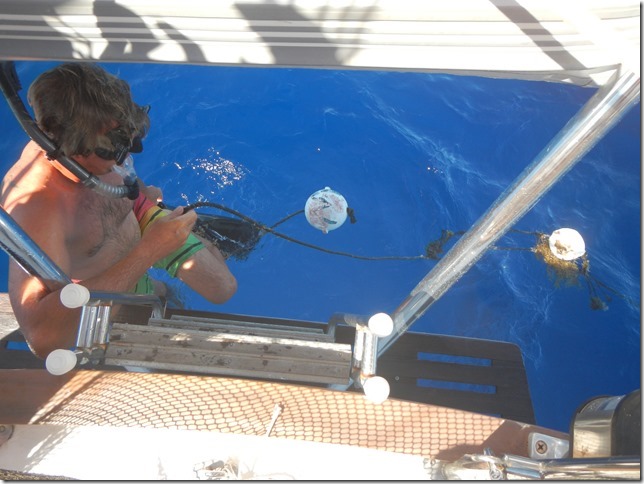 Besides the mid-passage swim the rest of the trip was uneventful. For what we expected to be some of the roughest and most difficult passage making of our entire planned cruise we couldn’t believe how lucky we were.  Not only was the wind not too strong, we were not beating into it! It was out of the north almost the entire trip making it so easy.  We also never got caught by any opposing current, or at least any strong enough to note. We’ve been bracing ourselves for this passage for years, since we planned this cruise, and in the end it turned out to be some of the best sailing/motor sailing we’ve had.  We found no thorns on this thorny path. We made great time and even had to slow down a little on the third night to not arrive in the dark.

On Saturday morning we watched the sun rise over the mountains of Hispaniola.  I knew there would be mountains, but couldn’t quite imagine them after all the flat little islands of the Bahamas.  They were HUGE, and so green.  You could smell the dirt and trees miles before we got close to the shore. As we got closer and the light brighter, what was one mountain came into focus as layers of mountains.  Another one appearing behind the next. I may just remember the morning we sailed into Luperon forever. It was breathtaking and a stunning way to end an unexpectedly peaceful passage. 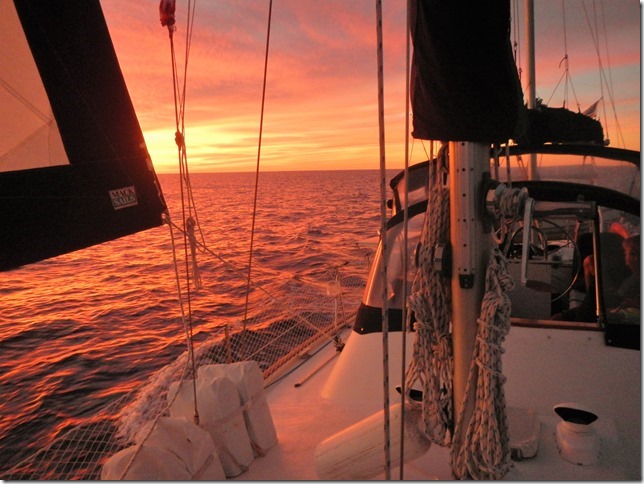 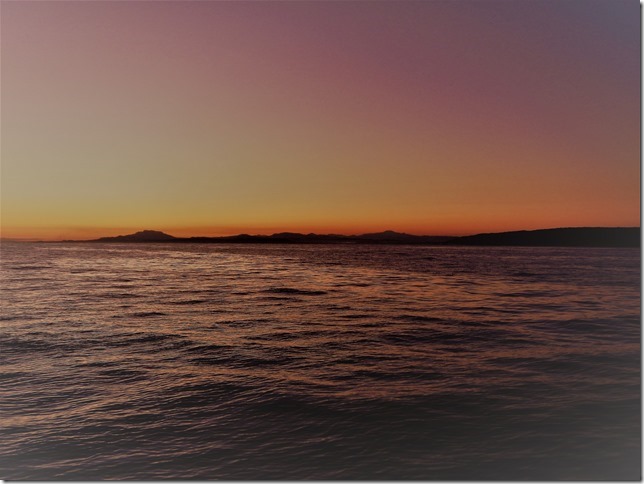 6 thoughts on “George Town to Luperon”