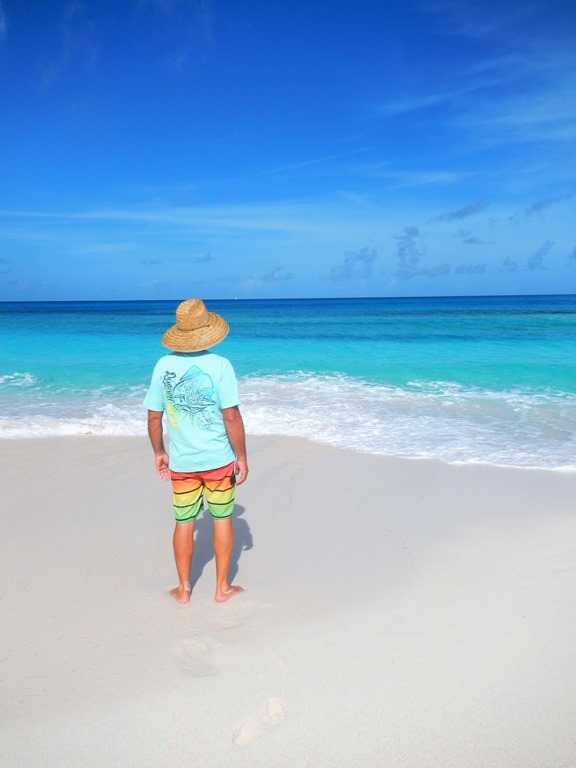 The week between Christmas and New Years we worked our way south stopping at places new to us and a few favorites.  We did some diving off Guana. We did some (not really) spelunking near Oven Rock.  The cave had a fresh water pool in it and you could, if so inclined, go scuba diving down some of the tunnels that are supposedly several hundred feet deep.  I couldn’t come up with a scenario in which I would be motivated to dip into some cold, slime-bottom, bat-pee-scented water as others have said they have done. I was happy just to look around—and the water was a pretty color.  We stopped at Lee-Stocking and confirmed that it is my favorite island in the Exumas.  If I won the big lottery I would buy the house overlooking Adderly Cut without hesitation and I don’t even want a house.  But I don’t play the lottery and the island was recently sold.  Guess I don’t have to stress about that then, huh?

We’ve had trade winds for weeks, meaning it’s all been out of the east making it easy to go or stay pretty much where ever we wanted (how glorious) but a cold front was coming in as they do in the winter and, like us, almost everyone was headed to George Town to shelter and replenish–we were still nursing along on our one stick of butter.  The routes off shore headed south looked like an interstate with literally dozens of boats making their way down.  I don’t think a single boat missed the chance to do some fishing.  The VHF radio was alive with crackles of “Fish ON!”.  There were just as many exclamations of disappointment from catches escaping being brought on board. You could here the excitement from those who did get their catches onboard and who were making plans for dinner—or securing help from their friends for a lesson on filleting once in the anchorage.  You could tell when a boat had one on the line, all of a sudden it would be going cross traffic or sitting still with the sails flogging.  There were also plenty of chirps on the radio about not running over fishing lines.  It was truly like sailing in rush hour traffic with a bunch of distracted texting teenagers! Keith hooked one of his largest Mahi’s yet, he got it all the way up to the transom of the boat but it had bent the hook in the fight and slipped away like so many of the other fish out there.  (No photo- remember after last years disaster I am not allowed to take a picture until it securely aboard the boat).  We did catch three more smaller Mahi and we recovered our mood.  One was too small so we let it go.  Early in the day we saw a tuna boil and altered course; we drove around in circles dragging our lures while the tuna jumped completely out of the water all around us.  After four or five circles with no hits we gave up and rejoined the heard heading south.  I don’t know why we have such a hard time catching a tuna! 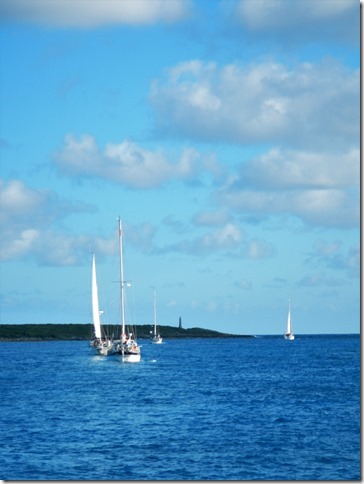 ^^traffic jam getting out the inlet

In George Town we planned on using the few days of weather to knock out a few boat projects so we tucked up into our familiar hidey-hole in Red Shanks. First on my list was chaps for the dinghy.  Chaps are canvas covers that protect the boat from the sun.  Three long days of patterning, sewing, and sucking on generator fumes (to run the sewing machine) and I had them finished up.  They looked great and to my surprise they fit perfectly—even with all the curves and angles all 17 cut-outs for the handles and such lined up.  I’d love to have a picture of them to post.  Unfortunately we found out very quickly that all my hard work was for nothing.  As soon as we tried to run the boat the water got funneled up under the chaps and dumped inside the boat.  It would have filled the boat up in minutes.  We had to take them off immediately to not sink the boat while motoring. I worked on modifications for two more days before deciding to give it up and move on.  No chaps for us. Tears were shed, sailor-words were used, but I am over it now.

Besides, we had the best start to the New Year ever!  Craig went all out and made Belgium waffles with strawberries, blueberries, cherries and Canadian bacon.  May the rest of the year be this sweet!!!  Good food, good friends, good memories. What a great start.

There was a patch of beautiful weather following the front, we used it to go diving and dinghy over to the beaches at Stocking Island.  We kept the big boat in the hidey-hole knowing the next front was going to be, in the words of the weather man, a whopper.  I’m glad we did as the boats piled in over the next few days. We would have lost our tucked-in spot for sure. We were fortunate to not have anybody crowd us either. It is always the worry of another boat getting too close that is the most stressful, not the wind or waves.  The front packed sustained winds in the upper 20’s and 30’s with gusts well in the 40’s.  Most boats stayed attached to the tiny patch of seabed they claimed as home for the blow, those that didn’t found new patches of seabed to secure themselves to without harm.   It hasn’t stopped blowing since the front came in a full week ago.  We’ve been total bookworms, not much else we can do.  Too rough to really dinghy around and we wouldn’t feel good about leaving the boat unattended for long. Starting to go a little stir-crazy though. 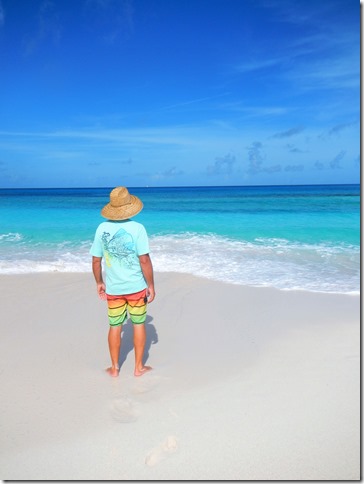 ^^ The night before the cold front there was a dinghy raft-up in the anchorage.  It was a fun way to meet our new neighbors and the idea had been to escape the mosquitos on the beach.  That was the idea anyway.