We are back on the other side of the stream.  The crossing was easy, as expected.  We motored almost all the way, as expected.  We did run into a choppy 5 foot swell on the west side of the Gulfstream that lasted about three hours, maybe from Bonnie?  I’m not sure but without enough wind to put up a sail to stabilize us we got a little rolly.  A gallon jug of cooking oil got dislodged (because I didn’t have it where it belonged), it hit the floor and blew off the lid.  We got oil sloshed up on both sides of the galley and all down the “hallway”.  Kai looked like a cartoon character running in place when he tried to get past.  It provided the only incident of the trip, other than that is was beautiful flat waters.  Keith caught two Mahi-Mahi but they were too small to bring onboard, he caught a tuna that is being eaten for dinner tonight with friends.  We had a very brief visit from about eight spotted dolphins, I don’t ever remember seeing spotted dolphins on the bow so that was cool.  The mellow, relaxed mood dissolved as we approached the Fort Pierce inlet; we had forgotten to take into account that it was Memorial Day weekend.  The inlet was a madhouse! We had planned on anchoring near the inlet but didn’t feel like partaking in the party so, much like the decisions made the day before, we just kept going.  We picked up a mooring in Vero instead. That’s the place that has the free bus that picks you up at the dinghy dock and takes you to the grocery store. And while we need a grocery store, it was 31 hours after our spontaneous decision to cross and we were exhausted and just wanted to sleep. Good crossing or not, we were tired.

^^ The few moments that there was enough breeze to put up the sail! 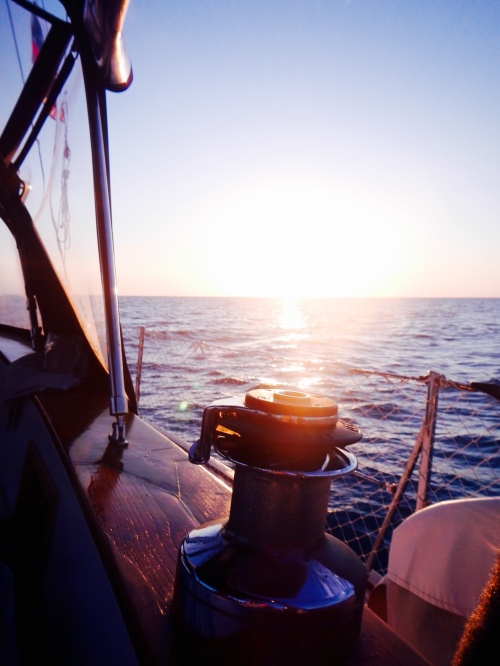 ^^ Keith topping off the diesel- we motored the whole way!

^^ Like a lake (except those three hours when it wasn’t) 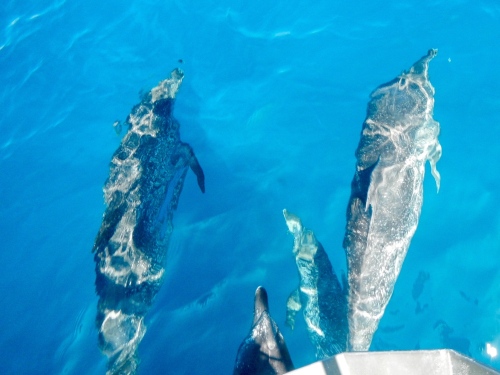 ^^ I love that when dolphins see you they will stop what they are doing, swim over and say HI and play in your wake, even if it’s just for a minute.  These ones were very vocal, I heard their squeaks and clicks the whole time they were around.

Now, to figure out what to do with ourselves now that we are back where we started from.  We haven’t a clue yet!

One thought on “Gulf Stream Crossing”