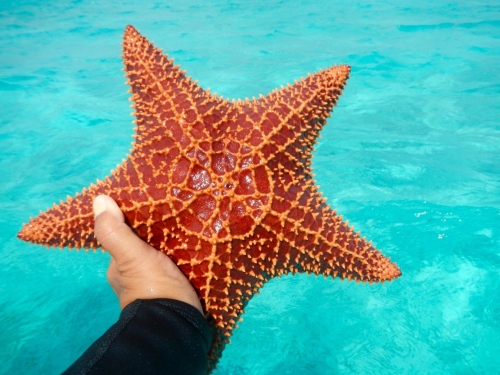 Long Island is, well, long. 74 miles, I think, by 4 miles at its widest lending it self to best be explored by vehicle.  Ben and Lisa rented a little car and invited us along.  Okay!  First stop, before even getting the car, was the Saturday morning Farmers Market.  It was a true farmers market where the locals brought in fruits and vegetables from their gardens along with baked goods and handmade items.  We got fresh arugula, peppers, and even Concord grapes.  Keith got another bottle of hot sauce. We heard many of the vendors talking about how much smaller their crops were this year due to the hurricane, but what they had to offer looked nice. 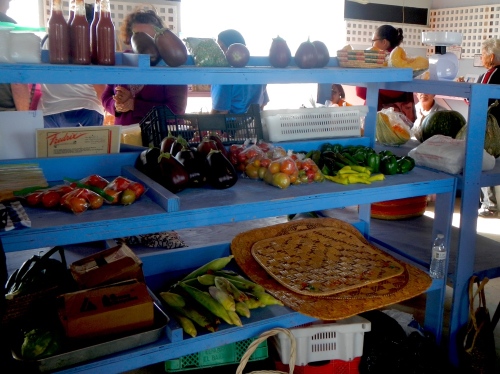 We are anchored in Thompson Bay, close to the middle of the island, and first decision was to head either north or south.  South is always good.  Chart books and guidebooks in hand and a trunk full of snorkel gear we set off.  From our first stop to our very last, we pulled over at every old church we saw.  This island has no shortage of churches new or old.  The first one was by far the most interesting and by far the oldest, dating to the 1500’s and believed to have been built by the Spanish.  We also made a few stops at some local dining spots.  We had conch salad at Seasides where you eat out on the deck and the conch is plucked up out of the water to order.  I like fresh.  We also dined at Max’s conch grill.  We liked everything about it, the owner, the menu, the food, and even the prices. 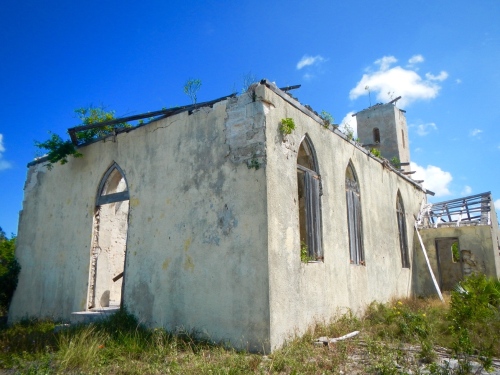 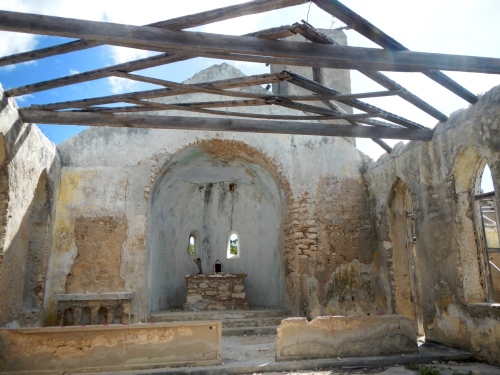 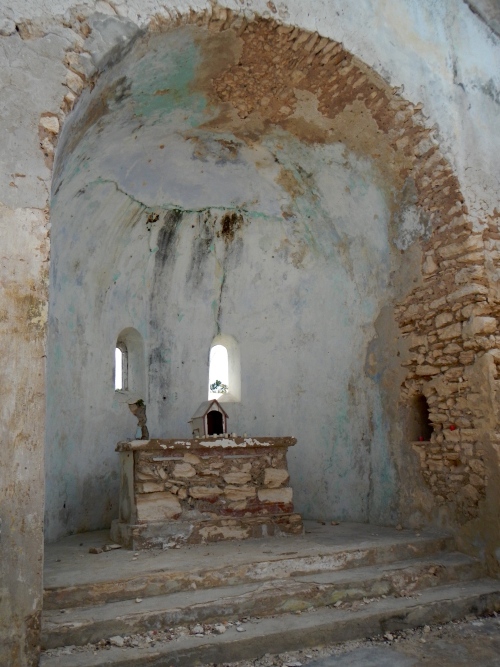 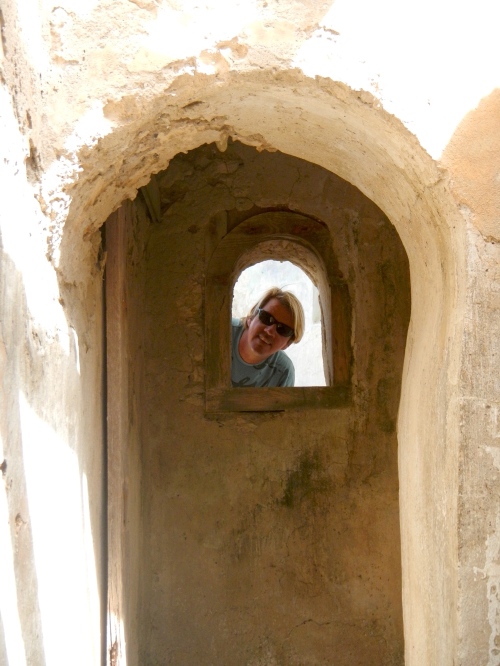 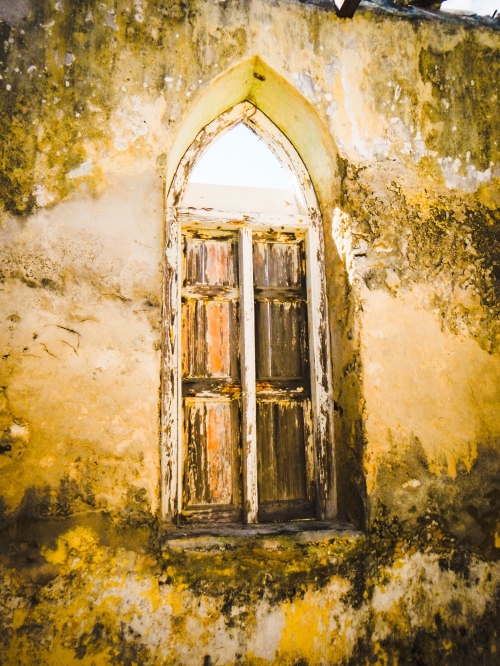 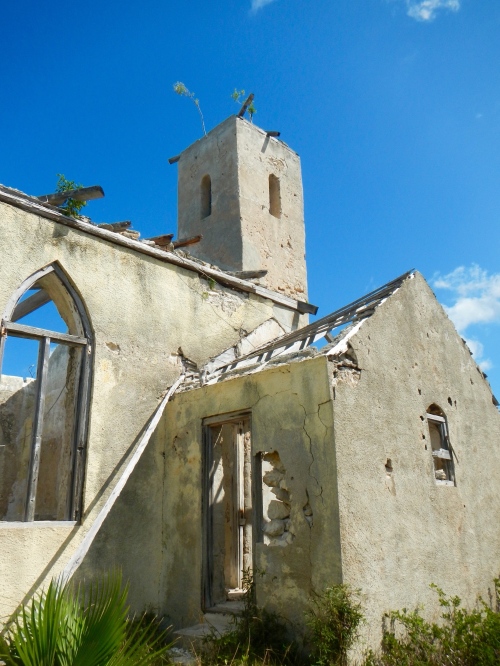 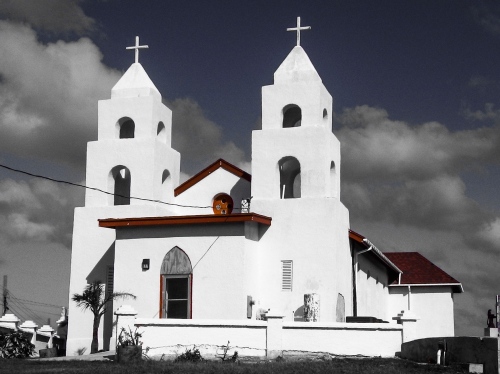 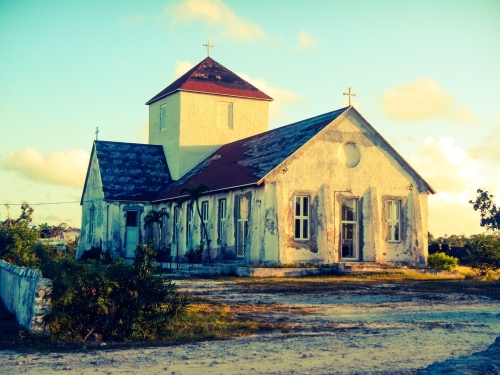 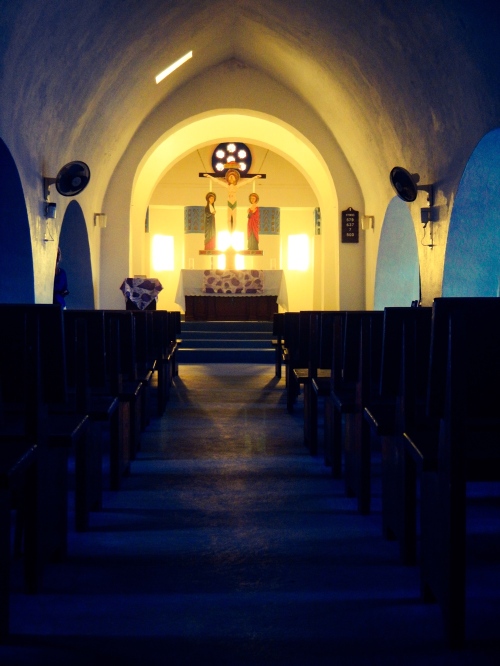 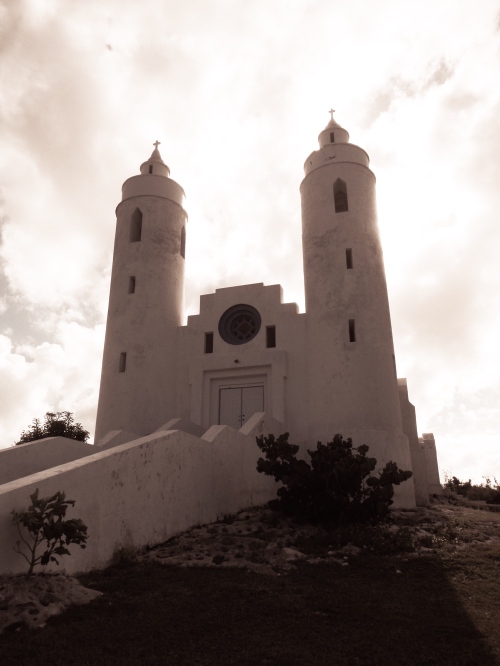 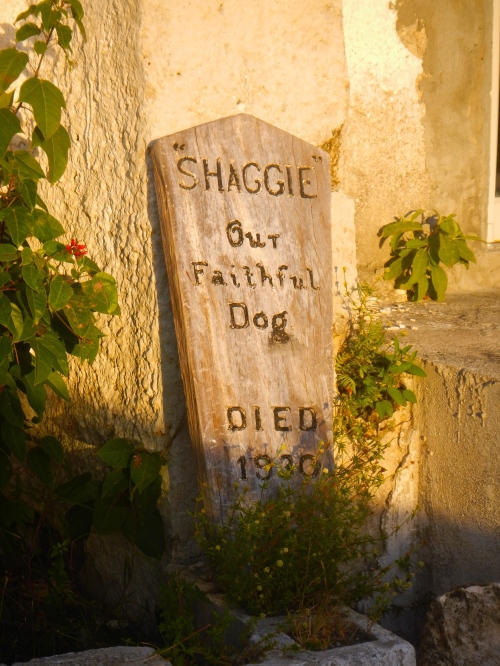 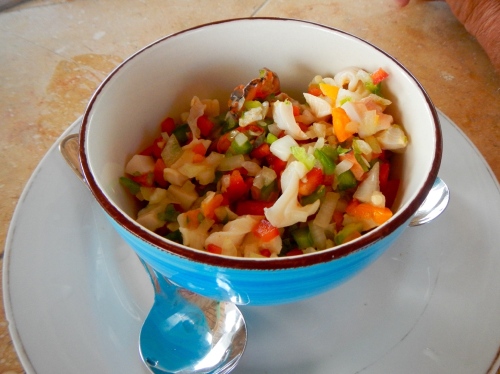 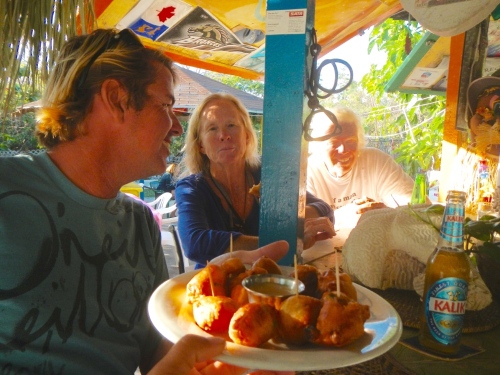 The main attraction of the day though was Dean’s Blue Hole.  The blue hole is on the ocean side of the island, tucked up in a beautiful little cove.  It is surrounded on one side by a semi-circle of high cliffs and the other side is the beach and shallow sand opening into the ocean.  In the center it is 663 feet deep.  It is the deepest blue hole in the world.  I had seen pictures but hadn’t realized how magnificent it looked until I was standing on the beach seeing it for myself.  At first I had hoped we would be the only ones there, but there were several other people there and it turned out to be the perfect time to arrive because they were not only almost all other boaters we were anchored next to  and had shared our volunteer day with but they happened to be some of the world record holders for free diving and they were there doing training and practice dives.  Several of the teenagers from the boats were also getting lessons on free diving that day.  Keith got really interested in some of the free divers about a year ago and started watching the YouTube videos and following some of the competitions, so he was pretty excited to watch them in person.  At first we were all standing on the edge of the beach just watching everything when one of the professionals asked us “didn’t you bring suits? Aren’t you going to get in?”  I said we didn’t want to get in the way, we were just watching.  She replied “no one owns the hole, you should get in!”. I am so glad we did, it was very churned up from the rough seas off shore so visibility was maybe only 25 feet, but it was definitely neat to see.  There is a floating platform over the deepest part of the hole with a crane and line that goes to the bottom for the divers to use.  We watched a few of the teens do their dives, they were going down 20+meters!  So impressive!  A trainer accompanies them and actually is face to face with them keeping direct eye contact the whole way up to the surface.  We also watched one of the professionals do a short practice dive.

When we got back to shore we hiked up the perimeter cliffs for a better view and talked to some of the divers/cruisers.  We were about to leave when one diver was about to do a 97 meter dive.  That is 318 feet!  We stayed to watch from the shore.  Three minutes after descending the diver surfaced. He was brought up to the surface by another diver; he had become completely unconscious on the way up.  From all the videos Keith watched we knew this wasn’t too uncommon but it got scary when they started mouth-to-mouth resuscitation.  The diver came to and was perfectly fine just a few minutes later. Yikes.  Even without the scary part, the whole experience was momentous.  Technically, it hadn’t been on my “bucket list” to experience, but I’m calling that an oversight and penciling it in just so I can cross it off.  Although, I wouldn’t pass up a chance to go see it again either.

^^Lisa captured the best photo of the day with this picture she took, it successfully shows this magical little cove.  Thanks Lisa for letting me post your photo! 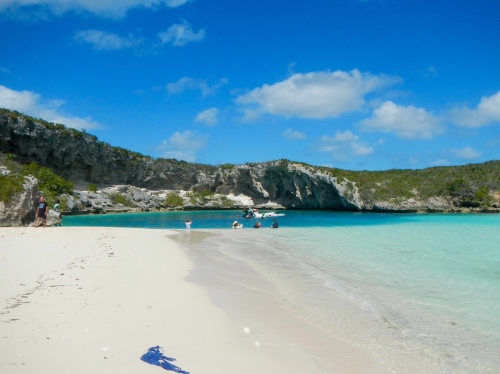 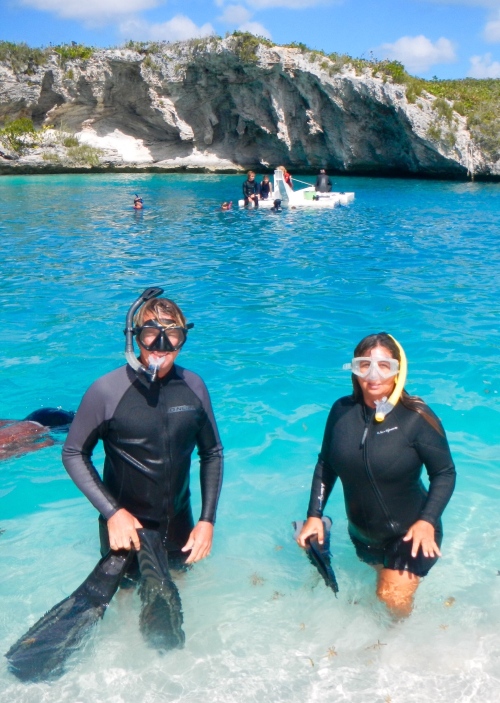 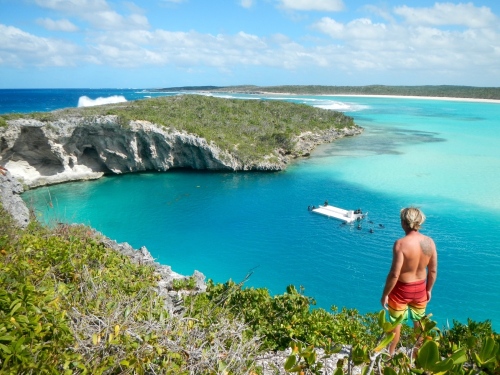 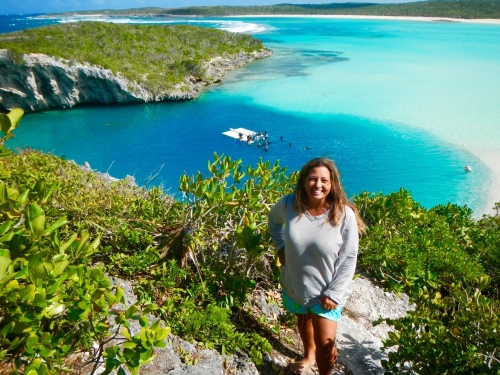 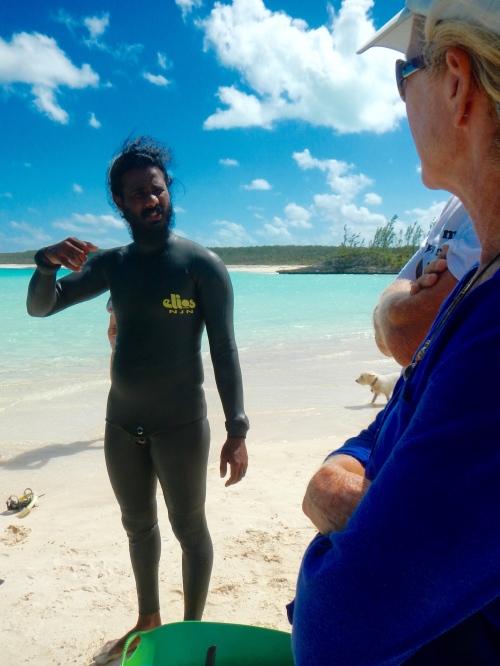 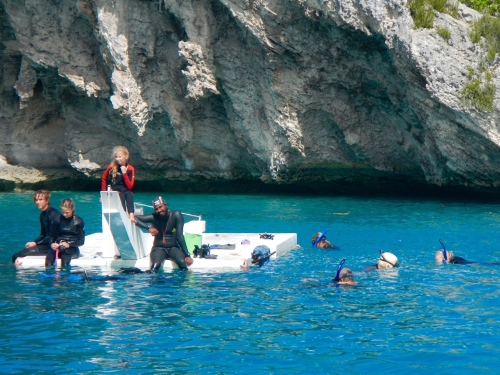 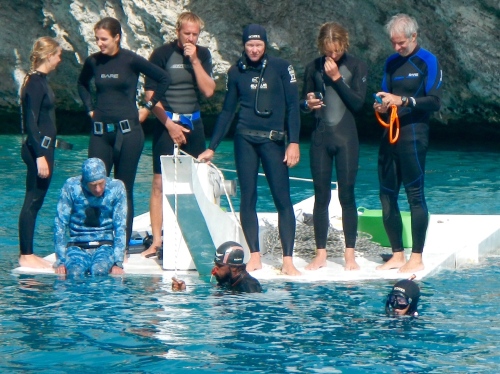 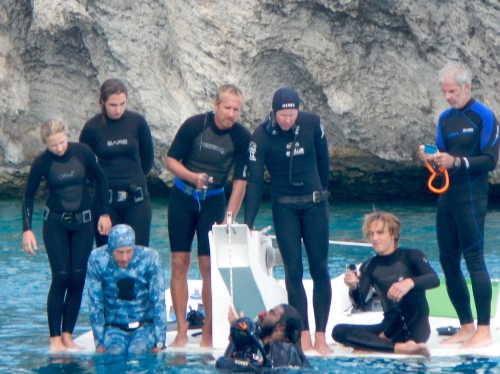