I think its fair to say we have not fully embraced or immersed ourselves within the cruising community of George Town.  Maybe we are missing out, or maybe its just not what we are looking for.  Our George Town hidey-hole and the outlying semi-secluded anchorages have kept us more than sufficiently close to all the choreographed activities.  We thought a little sail over to Long Island would remove us even more so you can imagine our surprise horror when we were hailed on the VHF radio as we entered the harbor by the “welcoming committee” complete with cheering and clapping and directions on how to find the party once we got anchored.  The look on our faces must have been priceless while Keith stammered through a “thank you” and I resisted turning the boat around and running!  After a moment though we decided that it was better to be “cheered” than “booed” so we just decided to embrace it all!  Hello Long Island!!!!

We immediately recognized several of the boats in the harbor as ones we hoped to see again and were quick to reacquaint, we also found that the “welcoming committee” was nothing more sinister than the tale-end of a good cruisers party and a genuine “welcome”.  With Ben and Lisa at our sides we ventured into town to complete our celebration of arriving in the tropics at the local bar.  I think we had all decided that this is a special island before we even pulled up our stools and ordered hogfish and conch.  We talked for a while with the owners, a husband and wife team, and enjoyed them both.  We finished the evening off with a walk up the Queens Highway and found ourselves inside the little yellow grocery store.  Lisa and I grabbed onto each others arms with our mouths gapping open- the selection of food, most notably the produce, was like we haven’t seen since the States.  Sorry Exuma Markets in George Town, they’ve got you beat!!  We squealed over things like kiwis and plums.  Too bad we had both just stocked up before leaving George Town.  Friendly is how I’d describe it here so far, very friendly.

In the morning we listened to the short and sweet VHF net and learned that a volunteer work party had been scheduled for that morning to help with the ongoing Hurricane Joaquin recovery here on Long Island.  Following through with our commitment to embrace everything here we packed a lunch and headed off to join in.  I don’t know all the details of the whos or hows yet but an ongoing coordination between the boaters and the locals hit the hardest here has been in play for a while and this was only one work day of many.  It appears that there are work parties organized several times a week.  Transportation was provided to shuttle the volunteers to the southern part of the island that suffered the most devastating losses.  There were enough volunteers from the anchorage to fill two pick-up truck beds and one car.  We were unloaded on the doorsteps of a family home and business that had survived a 10 foot wall of water passing through it.  It had filled up with debris and just about everything inside had been destroyed.  The property had been wiped clean of all the fruit and vegetables once growing on the grounds, it had over 100 pineapple plants before the storm.  It has taken four months for the electricity to be restored.  The father and sons had already rebuilt the back half of the home, where they were living, but the coordinator said that they had been so busy helping others in the community that they had not finished rebuilding their own home. We were asked to help with removing the remains of the kitchen, reframe it, and enclose with new plywood.  I don’t think everyone was unloaded before the demolition was under place, I didn’t even get a “before” photo.  There were more hands than could even fit, so the men did the construction and the women went about clearing debris.  Within a few hours the demo was done and the new frame completed including the windows and doors fitted and the outside plywood hung. The lot was cleared into two huge piles, one to burn and one for the dump.  It was sad to see so many personal items that had been ripped from the houses and strewn about, everything from the contents of the spice cupboard to Christmas decorations.  A small storage shed/laundry room that had been filled with sea water was finally emptied of all of its ruined remains.  It was a great way to meet the boaters we hadn’t met yet and get to know the ones we had better. More importantly the homeowner and his sons were very appreciative and they couldn’t wait until the wife came home from teaching school to see the work completed in a day.  They surprised us by providing not only coolers of water, sodas, and beers, but also bringing us a beautiful hot lunch from the restaurant where the daughter works. 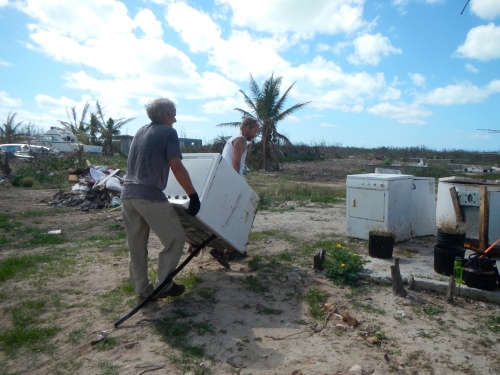 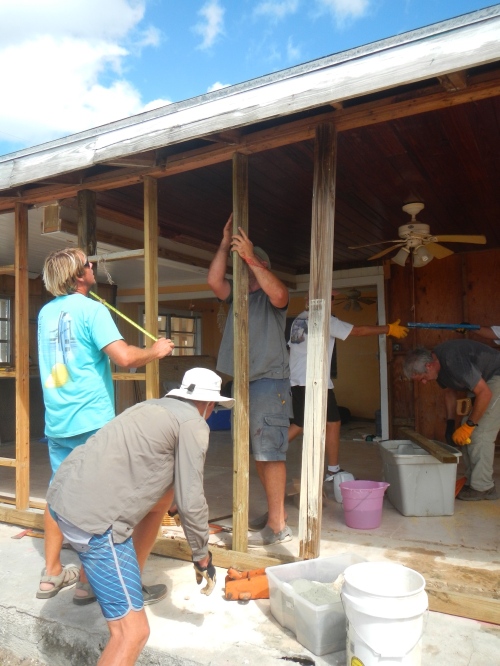 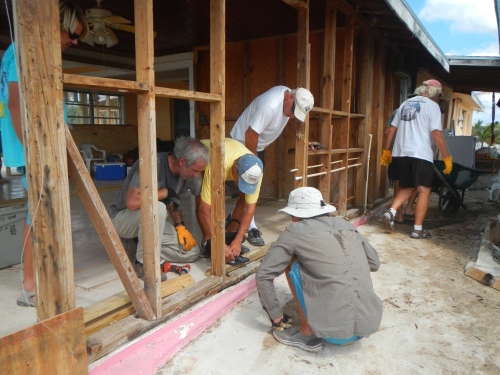 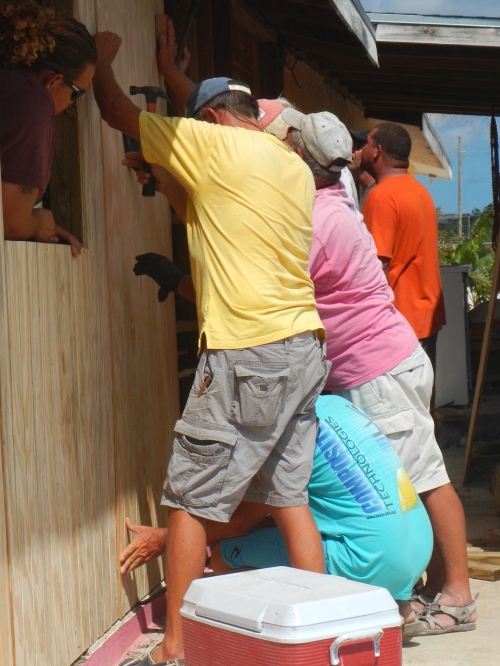 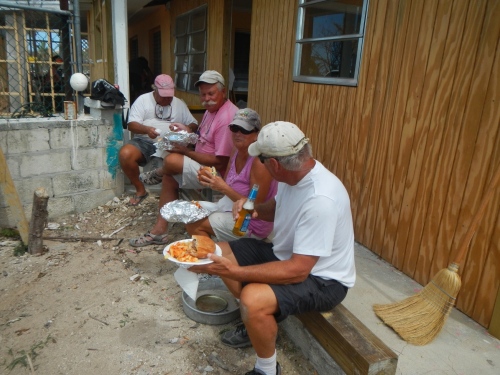