I know we will encounter lots of “boat boys” as we travel further south through the Caribbean and some of them offer real services, but it is not something really seen here in the Bahamas.  Only here in the “big city” of Marsh Harbour have we encountered anything close.  There is a public dock here where the ferry boats load and unload and you can tie up your dinghy for free and go to town.  During the summer and when the kids are not in school there are frequently kids of all ages stripped down to their underwear jumping off the pier and having a good time just being innocent kids.  They also come scurrying over when they see you headed towards the dock.  Some ask if they can help you tie up, some ask to be “sponsored”, some just ask for money.  I haven’t figured out how to think about this yet.  They are just kids playing around and have learned how to make a little candy and soda money, it’s worked for them before so I can’t blame them for trying again.  Why wouldn’t they.  On the other hand, I want absolutely no part in reinforcing this behavior.  We simply and politely as we can say we don’t need help and Thank You.  If they are not too pushy we enjoy chatting with them.  But a friend of ours brought up a good point “five-year-old logic will mess you up” he said, and a dollar is pretty cheap insurance.  We’ve watched the kids climb into the dinghies and play with the items in the boats while the owners were in town (life jackets, buckets, oars) so it’s not like they are doing a good job of “watching” your dinghy for a dollar, but I don’t want a cranky kid fiddling with our outboard motor either.

I had a pushy little girl the other day, but I have to give her props for her honesty.  She said she wanted dimes and quarters, she likes to take them to the bank.  Me too, me too, my dear.  Keith keeps getting the same little boy asking to be sponsored.  He must not recognize him though because his reason has changed four times already.  Sometimes he needs a costume for a church play, sometimes he needs a uniform to go on a field trip.  Keith asked where his field trip was to, he said to a resort.  Poor thing, hasn’t learned to lie very well yet.  In frustration today he just wanted money to buy something.  We didn’t support the behavior, but I’m still struggling with it.  I’m not sure what is bothering me so much, is it disregarding a child asking for help; who am I to think I know their situation?  Or is it that I don’t like being asked for money when no service is being offered (kids or not).  I know for sure I don’t like trying to sneak into the dock before the kids notice us; we even went in the rain to avoid them one day.

I may not enjoy being approached by them, but I do enjoy watching the innocence in their play.  Just jumping from the docks, squealing, and teasing, and daring, and pushing.  Universal kids at play. 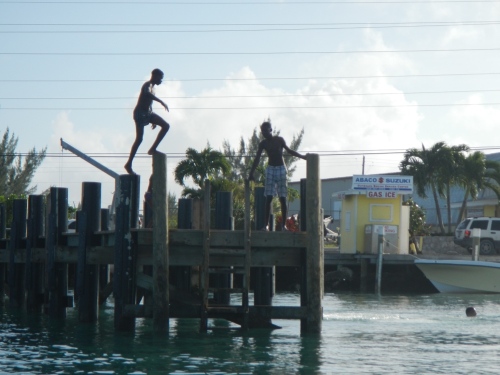 When I asked Keith to slow down so I could take their photos he said “you know they are going to ask for money when they see the camera right?”

It was a fun interaction though, they showed off their jumps while playfully asking for bikes for Christmas.  The little one only wanted chocolate.  We responded by asking them for items on our wish list.  I guess they don’t believe in Santa anymore. It was a fun little banter. (The pushy little girl wasn’t there)