“Yes, Virginia, there is a Santa Clause”

That was the delightful email I received letting me know that miracles of miracles (and friends who drop everything for you), my iPad would be arriving by plane after all.  Yippee!!! We are back up and running!  But Santa didn’t stop there, her goodie bag was filled with special treats for us and even ones for Kai.  Included was a whole bag of sauces from our hometown, award-winning hot sauce company, Island Spices. Now we’ve got plenty of new ones for us to try!  I haven’t sampled them all yet, but the verde sauce is my favorite so far.  I made Santa and Santa’s helpers some cracked conch and fish to say, Thank You!

The weather hasn’t been so good to us lately, but we are still managing to feed ourselves pretty well.  We’ve been in Marsh Harbour three times now, and three times a hot tray of Bahama Mac-n-Cheese has managed to find it’s way aboard the boat. We must be slowing down, though, I got a picture of the third tray before it disappeared.

Yesterday the winds let up enough that we ventured out of the protected anchorage at Marsh Harbor and sailed over to Man-O-War Cay, it was still a bouncy and noisy night at anchor but we got to go diving first thing in the morning (no getting in the water at Marsh).  Hungry for something fresh, we both were hunting.  Grouper season is closed, groupers must have calendars because we saw several big ones not even pretending to hide. The one hogfish we saw escaped us both, good for him, but we wanted fish!  To my surprise Keith came up with a lion fish.  He doesn’t like them, not just because they are destructive and invasive, but he wants absolutely nothing to do with them and their venomous spines.  I, however, have been dying to try one.  At his reluctance he let me bring it home, cut off the spines and fillet it.  He still wasn’t really interested in it for dinner.  Too bad, we eat what we kill.

Not really looking forward to a second night in a bouncy anchorage, we sailed back toward Marsh Harbor again this afternoon.  We had a temporary lull in the winds and it was a good, calm sail, Keith dropped his fishing pole in. He caught his first mutton snapper on the rod-n-reel finally.  Does he look happy?  Now he had a dinner he was looking forward to eating too.  I fried up both the mutton and the lion fish tonight. We honestly really liked them both. 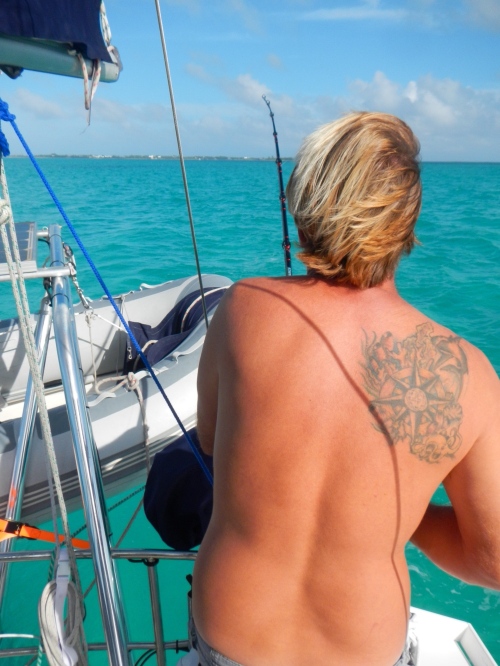 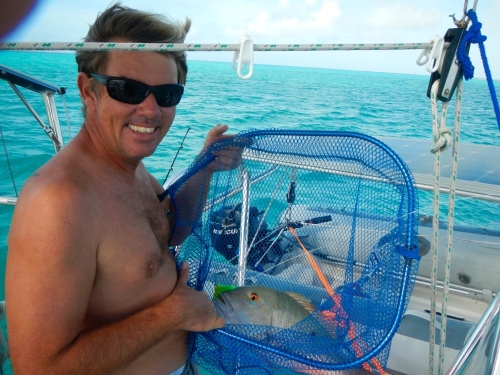 One thought on “Yes, Virginia, there is a Santa Clause”