After catching our breaths from our less than graceful entrance to the Bahamas and playing all-out while our friends were here for four days, we started working on easing into this new lifestyle of ours.  It involves a lot of living in the moment and soaking the beauty we are now surrounded by, and it also involves working in some new-to-us daily chores.  Even Kai has a new lifestyle to embrace.

Our first order of business was to get our watermaker going, it was a straightforward process of getting up and running, but we quickly realized that we had overlooked that the system did not come with TDS meter (measures the purity of the water) and we had not purchased one.  Kai taste-tested the first collected glass and it met his approval.  Of course he also drinks the ocean every time we turn our heads so that may not be the best method of quality control.  Thankfully we have some good friends setting out on their cruise right behind us who also have the same watermaker.  They are buying two meters and bringing one along for us in a few weeks.  For now we are going on taste alone, it tastes clear.  (And, yes, those who know me-I drink water now) So making water has been added to the daily morning routine.

Kai has also been getting into this new reality.  We can’t say it was without some bumps-this boy did love his routine and let us know at first what he thought about us messing it up by peeing on the traveler three times.  Once he realized beachy romps were going to be a staple of his days he seems to settled right in. Though we are having a problem with his obsession with sea grass.  He won’t stop eating it, he even dives his whole head underwater to pull it up.  Between the sea grass and sea water, he got a bit sick the other day and was acting like he was hallucinating, so until we get his extra-curricular diet choices curbed, he lost his off-leash privileges. 😦 If you are wondering what he has in his mouth, that is a polka-dotty farting dolphin- he loves it.

Catching and preparing dinner also takes up a large part of our day.  We have been lucky and Keith has speared dinner everyday.  One afternoon we thought we would switch it up and instead of spearing Keith thought he would try to catch a Mutton Snapper or Yellow Tail while trolling in the dinghy over some of the reef where the current is strong.  He  did catch a little Yellowtail…..very LITTLE. 🙂  We did take a break from hogfish and conch for one night switching it up for burgers with guacamole and fresh-cut sweet potato fries.  I made the burger buns, we both decided they were a hit.  Thank goodness because baking bread and tortillas will be a pretty regular weekly routine for me now. 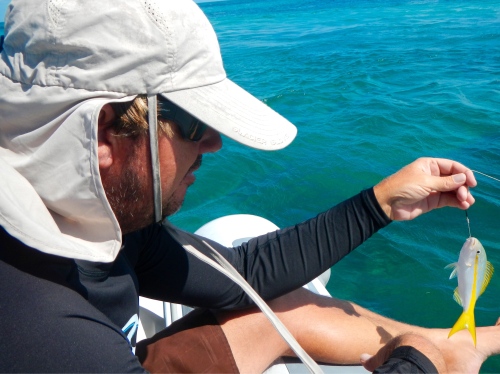 Going to the grocery stores and running errands isn’t quite the same as running to Publix anymore. We ran the dinghy over to Grand (if you look closely, you can see the town on the island behind the boat in the next photo) we went with the agenda of buying eggs, dumping one bag of trash, finding Internet in any form, and buying a tank of gas.  The store was out of eggs, the ferry boat wasn’t due to arrive until later that afternoon.  They did have a canister of oatmeal for $10.00-whew! Glad we still had oats onboard.  We did dump our bag of trash, the island was burning the trash that day so good timing.  We couldn’t find any wifi that was working, and the batelco store (Bahamas phone company) was not open-so no internet or data cards.  The gas boat had come in and they had gas again, so two out of our four items got checked off the list.  That is pretty successfu here.

All in all, I think we are doing a great job of acclimating.

2 thoughts on “A New Routine”