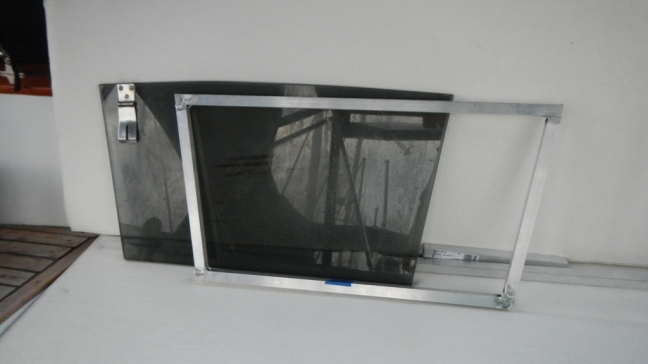 The past few days have been filled with more odd angles than I care to figure.

We decided to make a security grate for the companionway hatch out of aluminum stock and it seemed like an easy enough project for me to get started on. I’m not sure if I had more trouble figuring out all of the angles or cutting a halfway decent line with a hacksaw. The hacksaw and I are not the best of team mates. I tell it where I want to make my cut, and it doesn’t listen. Of course after hours of my hard work Keith came home and said it would have taken only a few seconds to cut it up at work if I had given him a template. Ugh.

On the brightside, my cuts still ended up being clean enough for him to weld up. We did a quick fit after he tacked up the edges and it looks like it will work just fine. Of course the center bars still need to be added in the photo below, as I think even I could climb through that hole.

Not yet being done with not-right-angles, I plodded away on the cushion project some more. I am changing them from long bench like cushions to three smaller cushions per settee. I was pretty sure I had this, just divide the length of the cushion by three and cut…… Until I got started. Now would that be the front measurement or the back? They aren’t equal lengths. They look like it but they aren’t. And when I divide the back cushions by three, why don’t the seams line up with the bottom cushion seams? Should I try to make some of the corners right angles? Which corners? Or should I make them parallel to the bulkhead. Which bulkhead, the bulkheads aren’t parallel to each other? Ugh.

I think I have them figured out, but we’ll see when I am done. Fingers crossed I got it right.

Before I got started I was worried I didn’t have enough batting. Obviously I didn’t need to worry. There was even enough after Kai had it as his afternoon snack. He has got some good pillow poops going on

Where were we one year ago: 8 screws

One thought on “Trapeziums and Trapezoids”